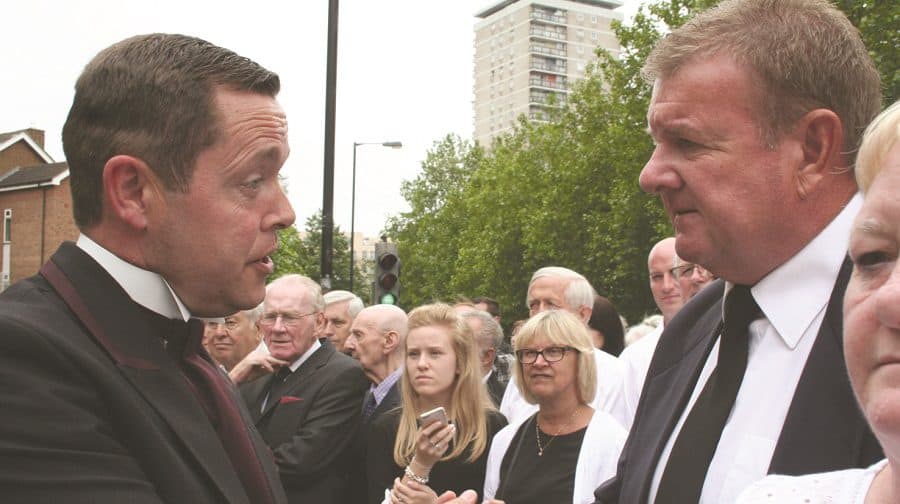 The police officer responsible for overseeing the repatriation of fallen British soldiers through Wootton Bassett has written a book about his experiences and dedicated a chapter to the late Barry Albin-Dyer.

Jarra Brown, MBE, a former army commando and policeman of 22 years, met Barry in 2007 at RAF Lyneham after F.A.Albin & Sons had been given the Ministry of Defence contract to bring our boys and girls home when they had been killed in action.

Barry approached Jarra to ask if he could assist the Bermondsey firm with a police escort for the cavalcade through Wootton Bassett and to the M4.

“I knew straight away this was a man with a presence. He spoke so eloquently with a voice that flowed with so much compassion,” said Jarra, who became such good friends with Barry over the years as they brought hundreds of troops home, that he flew in from Cyprus last week to attend his funeral. Jarra launched his new book, 46 miles – referring to the journey he made with Barry between RAF Lyneham and the M4 – to thousands of people on Saturday.

In it he has dedicated a chapter to the late, great funeral director and his legacy  – the family firm.

“I had no hesitation dedicating a chapter in my book to Barry Albin-Dyer due to the huge honour, dignity and respect Albin’s showed to each of our fallen who paid the ultimate sacrifice,” said Jarra.

“Let there be no doubt in anyone’s mind, who lost a loved one, the level of care that was administered in returning each precious loved one home, was second to none.”

46 miles went on sale on Armed Forces Day on Saturday and is available online from £14.99.