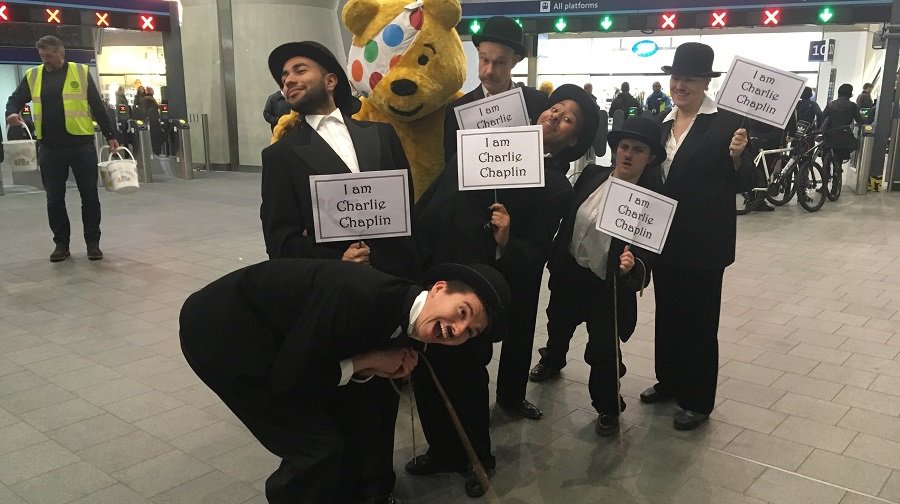 Members of People’s Company theatre group dressed up as the famous British actor and performed their own silent film during the evening rush hour on Friday, November 17.

The pop-up event coincided with Southwark’s bid to become London Borough of Culture, which would see £1.1million worth of funding given to the borough for a year of cultural celebrations if it is successful.

John Whelan, a director of People’s Company, based at Southwark Playhouse, told the News: “Southwark has always been an area of culture; if we go back to Shakespeare it has that history so the obvious place for that money to come to is Southwark.

“Southwark does need the funding because there are so many small arts-based organisations in the borough.

“If you look at creative start-ups, Southwark has got the highest density for that in London so if you’ve got all that talent and capacity here, it’s a great place for that money to be invested.

“And it’s not just about the creative economy, it’s about all the other jobs that are created with that and all the visitors it brings into the area as well.”

Councillor Johnson Situ, Southwark Council’s cabinet member for business, culture and social regeneration, added: “It was a pleasure to see these wonderful local actors bring joy to the crowds at London Bridge station.

“The arts are such a powerful and important tool and, with your support, the council’s bid for London Borough of Culture will create even more opportunity and investment in local arts projects like this.”

Charlie Chaplin was born in Walworth in 1889 and is thought to have taken inspiration for Easy Street from his early years growing up on East Street.

Back the bid here: www.southwark.gov.uk/backsouthwarksbid