“Everyone who dies of breast cancer dies from secondary breast cancer. And yet when it comes to research funding, it’s a ridiculously small amount of money – only five per cent" 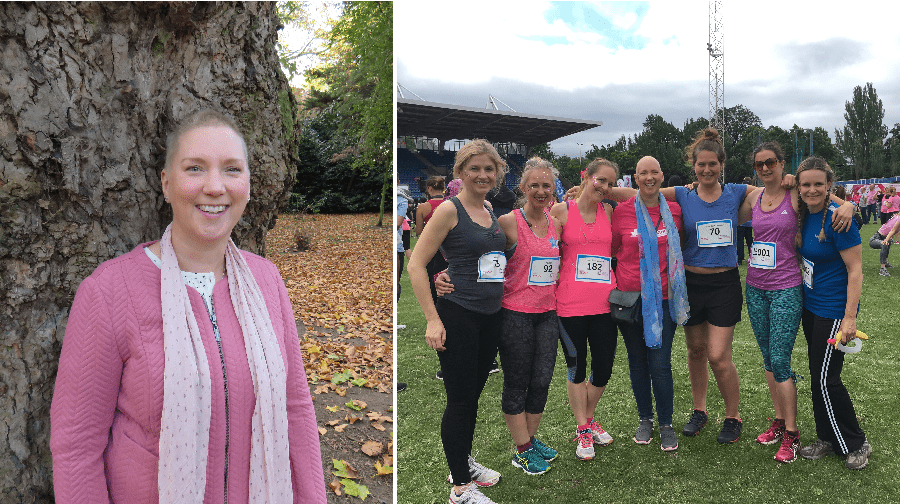 Charlie Hainsworth (left; photo by Owen Sheppard) and her friends take on the Race for Life (right)

A Camberwell woman who may only have two years to live is raising awareness of secondary breast cancer, and why the unexpectedly common killer needs more research funding.

Charlotte Hainsworth, 39, has lived in East Dulwich, Peckham and Camberwell for the last five years.

Since her twenties, Charlie has lived the high-pressure life of a property-law solicitor, often putting in fourteen-hour shifts at her firm’s London Bridge office.

But it all changed in March this year, when she was diagnosed with breast cancer.

“I went to the GP,” Charlie told the News, “because one breast just felt slightly firmer than the other, which probably sounds like some people’s wish.

“They couldn’t feel anything, but said they would refer me just to be on the safe side. Then I came back positive.”

At first she was given reassuring predictions from her oncologist at Guy’s Hospital that she would likely be in remission within a year.

That initial shock was followed two weeks later with the news that her diagnosis was already at a very late stage. Charlie was then given the secondary diagnosis: meaning her cancer had already spread from the primary tumour in her breast, to two sections of vertebrae in her spine.

Charlie said: “I had no idea what secondary cancer was. I had no idea it could spread. And once it has spread, it’s classed as incurable.

“I did ask them how long I have to live. I felt I wanted to ask, but I wanted to ask on my own. You worry so much about people being upset. As well as processing it yourself, you have to think about how everyone else feels.

“So I went on my own and they told me I’ve got a form of cancer that’s rarer and more aggressive. It’s called ‘triple negative’. It’s called that because they don’t know what it is, they only know three things that it isn’t. I’ve got the worst kind.

“Twenty-four months from diagnosis is what they told me. That’s an average, assuming some people have lived less long, other have lived for longer.”

“I was given chemo really quickly – within about two weeks of the secondary diagnosis. And I’ve had more chemo which has worked really well for me,” she said.

“The tumour [in her breast] was the size of a grape fruit. The chemo was to shrink it and take it out. I’ve also had chemo to shrink the tumours in my bones, which has helped them. Next I’ll have radiotherapy, after that I will have more chemotherapy to stop it spreading for as long as possible.

“My team were good at giving as much or as little information as I wanted. At first I was in shock and didn’t want to know.

“When I’d got a chance to process it, I went back to the oncologist and learnt more. And now I know more, I feel I’m participating in it, rather than just being told what to do.”

“It’s a massive cliché but things like this really do make you realise there are much more important things in life.”

Charlie came to the News with her story feeling spurred on by Breast Cancer Awareness Month, and her realisation about the lack of public awareness of secondary breast cancer.

“There’s not enough care for people with secondary breast cancer. And all the news and stories you hear are about primary breast cancer. We’re the forgotten group of people in the club that no one knows about,” Charlie said.

“Everyone who dies of breast cancer dies from secondary breast cancer. And yet when it comes to research funding, it’s a ridiculously small amount of money – only five per cent. Yet we’re the ones who will die from it. And that’s extremely imbalanced to me. That’s the big thing I want to raise awareness of.

Act today and help ensure that women and men living with incurable secondary breast cancer get the care and support they need; visit http://www.breastcancercare.org.uk/secondary.

Charlie has put her naturally positive outlook into ideas to make a practical difference.

She completed a five-mile walk with friends in July while I was in the middle of chemo. “It was really hard. I had nose bleeds and I was being sick, but we raised a couple of thousand pounds.”

Holding an afternoon tea also raised £420, and Charlie’s sister is looking to secure a place in next year’s London Marathon. Her friends have also done the Race for Life (10km run), and Charlie spent an afternoon taking collections from shoppers in Marks & Spencer in Marble Arch.