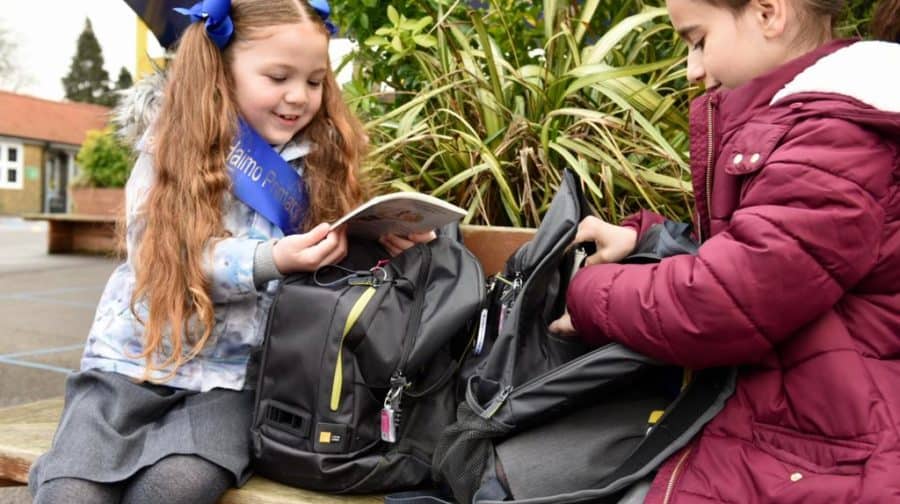 The backpack as seen with children from a Greenwich school where they officially unveiled on Tuesday (Image: GLA)

Pupils at an Elephant and Castle primary school will be given modified backpacks with air quality sensors, as part of project to monitor their exposure to dangerous fumes.

Pupils at the Charlotte Sharman Primary School will be among the 250 students at five schools taking part in a week-long trial wearing the air quality monitoring bags to record pollution levels during an average day.

Data from the specially-designed backpacks will then be analysed by scientists at King’s College to figure out the points at which youngsters are most exposed to air pollution, and how to tackle it.

Schools in Greenwich, Richmond, Hammersmith and Fulham and Haringey will also be given the kit, co-designed by Dyson and King’s College.

Speaking as he unveiled the modified schoolbags at the Haimo Primary school in Greenwich on Tuesday, Mayor Sadiq Khan said it was “shameful” London’s air was harming children’s lung growth. “An issue this large and complex requires bold and innovative action to protect future generations and ensure our children breathe cleaner, healthier air,” he said. “I’m proud that we’re able to launch world-leading studies like this which will help us find new ways to reduce children’s exposure to toxic air.”

Exposure to pollutants in childhood can worsen lung function in young people and is linked to chronic health conditions in later life, said Dr Ben Prednisone at King’s College London.

“By monitoring the air that children breathe on the journey to and from school, we will gain a better understanding of which pollutants are the most harmful and where they are coming from, helping us to support effective improvements in public health,” he said.

The announcement comes ahead of the introduction of the ultra-low emissions zone (ULEZ) in the city centre, which will see drivers of vehicles failing emissions standards paying a £12.50 daily charge on top of the congestion charge.

City Hall estimates the policy could cut harmful emissions in central London by up to 45 per cent.