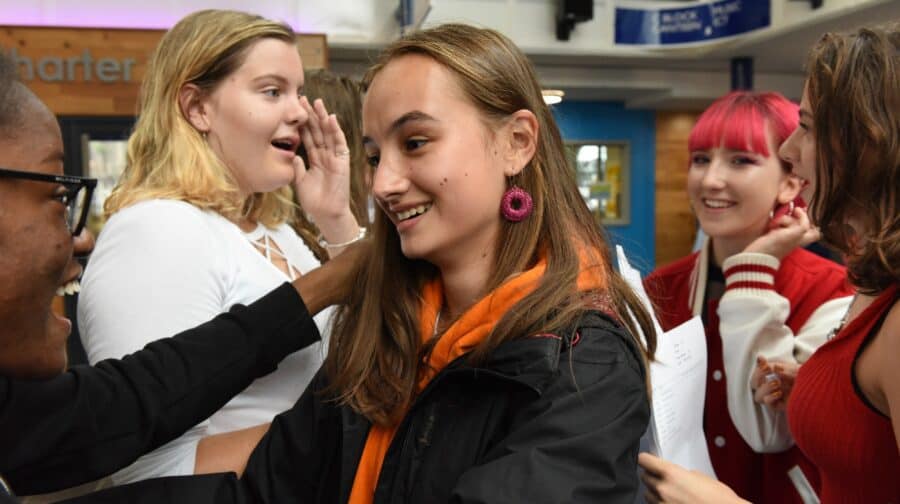 Ruby, when she received her GCSE results in 2018 Photo: Tom Parkes

Twenty teachers from The Charter School North Dulwich are cycling from London to Brighton next week in memory of head girl Ruby Fuller, who died from leukaemia in May of this year.

The sponsored 54-mile ride will be held on Saturday, September 19, to raise funds for research into new treatments.

It will also celebrate the life of the Herne Hill teenager, who told her family and friends she wanted people to ‘live kindly, live loudly’ as her legacy.

Ruby passed away just weeks after being told her cancer, that had been in remission, had returned as aggressive leukaemia.

She was first diagnosed with a rare form of blood cancer, T-cell lymphoblastic non-Hodgkins lymphoma, in July 2019, at just seventeen. Ruby taking part in the Duke of Edinburgh award, before she was diagnosed

After not responding to initial treatment, she spent the next ten months having gruelling chemotherapy, radiotherapy and a stem cell transplant before going into remission.

In all, she spent 120 nights in the Royal Marsden, King’s, and St George’s – where she was rushed for emergency treatment for sepsis – even spending her eighteenth birthday in hospital.

After a successful transplant she was able to go home in February 2020 – just before the COVID-19 pandemic took hold.

Heartbreakingly, during one of her regular check-ups only weeks later, doctors found that the cancer had returned. This time it was leukaemia.

After being offered life-extending treatment in April, Ruby decided against risking spending weeks in isolation and instead chose to go home to spend the time she had left with her family. She passed away three weeks later, with care from the St Christopher’s Hospice team.

Her mum, Emma, told the News: “She started off with a lymphoma that became leukaemia.

“We don’t know why, and there is still very little understanding about why teenagers or young adults develop cancer.

“Huge progress has been made since the 1960s when a patient was expected to only live a few weeks, but there are lots of different kinds of blood cancer and hers was an unusual type with fewer treatment options.

“She was already incredibly unlucky, and then didn’t respond to treatment so had the stem cell transplant as a last resort.

“Once she relapsed there was just nowhere else to go.

“At the time you feel like the unluckiest person in the world. But now I have now met other young people going through similar treatment. There are still many teenagers being diagnosed with cancer.

“Ruby’s consultant told us in cases like hers they don’t have the answers yet – and the only way they will is through funding.

“Already great improvements have been made, so we want to continue this further.” Ruby, just weeks before she died

A year eleven head girl, Ruby would have received her A Levels this summer and had secured a place at Bristol University to study geography.

Passionate about animals and the environment, and a committed vegetarian, she dreamt of working for a charity and helping to save the planet.

She had persuaded her family to give up flying for holidays – and was organising a trip to Europe by train when she was in treatment.

Before her death, she told her family and friends the most important things to her were kindness, and challenging injustice.

This belief has now inspired the other aim of her memorial fund – encouraging people to ‘live kindly, live loudly’ – as Ruby described it; ‘loudly’ meaning finding your voice for good. It has now become her motto – and one her family, friends and Charter School Community hope others will put into action.

Describing her daughter, Emma says: “She was a bit of a karaoke queen and word perfect to many Lady Gaga and Taylor Swift songs.

“She would be belting them out in the car on the way back from chemo, along with ‘80s songs from when I was young.

“Ruby managed to keep that sense of humour going right to the end.

“When it became apparent her treatment wasn’t working and she didn’t have long to live, many of the wonderful staff at the Royal Marsden would visit her in hospital, essentially to say goodbye.

“They would find her having very fun, loud houseparty and zoom calls, laughing with her friends. I’m sure they were a bit taken aback.

“One mum of a friend of hers told me ‘Ruby was a friend to anybody who needed a friend’.

“She loved animals and our cats, and was at every climate strike.

“She was conscientious and maybe quiet at school but the life and soul of every party with her friends, and had recently discovered the joys of vodka cocktails.

“Lockdown meant we couldn’t organise events, take her away to the seaside, or have a standard funeral.

“We were able to borrow a neighbour’s hot tub, put it in our garden, and give her a day of fun.

“After she died and we could have more people around, we hired a Hawaiian bar and made a ‘Ruby cocktail’ with her closest friends in our garden. We had some vegan cake and food, and shared our memories. It was as lovely as it could be.”

Head teacher Christian Hicks told the News Ruby was one of the Charter School’s model students and leaders.

“Ruby was such a great student and her kindness, integrity and energy shone through so clearly,” he said.

“She made the school a better place simply by her presence and truly embodied everything we wanted our students to be.

“These are just some of the reasons that we made her head girl.

“We always do a student and staff vote for the head boy and girl position and I clearly remember that Ruby won both the staff and the student votes, which is quite rare.

“Everybody is liked by somebody, but it seems that Ruby was liked by everybody.” Some of the teachers taking part

The bike ride is being held during Childhood Cancer Awareness Month, and will start at a particularly special place; her memorial bench in Brockwell Park.

Every year, 4,500 children and young people aged 24 and under are diagnosed with cancer in the UK. One in six will not survive.