Approval for 421 flats in ‘Toblerone Towers’ for Elephant and Castle, but zero ‘on-site’ affordable housing

No construction is expected to start for five years 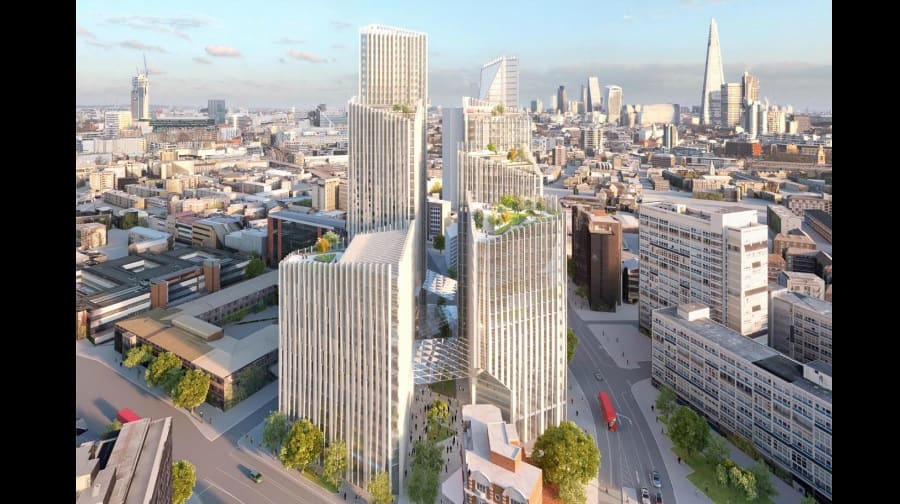 A giant block of 421 apartments has been approved for Elephant and Castle, with zero on-site affordable housing.

Southwark Council’s planning committee voted six-to-two in favour of the two blocks, each made of three triangular towers between seven and 39 storeys tall.

Nicknamed the ‘Toblerone Towers’ by architects Skidmore, Owings & Merrill, the £744.7m buildings will replace Skipton House on the Elephant junction’s northern edge – currently used by the Department of Health.

In its application, the developer London & Regional Properties Ltd, said 216 of the 421 flats will be two-bedroom, with the rest mostly one-bedroom.

At the meeting on Tuesday, campaigners spoke out against council officers’ recommendation to approve, as it emerged that the only affordable housing will be built “off-site”.

London & Regional insist on having 80 affordable flats (20 percent of the overall development) built away from the proposed Toblerones. Salisbury Close, Manor Place and Braganza Street have been earmarked as potential sites.

Council planning policies state that large developments should provide 35 per cent ‘affordable’ housing, unless developers can reasonably claim this will reduce their profits and make a scheme unviable.

The developer set out its reasons in a viability scheme submitted to the council last week. It shows an expected profit level is £74.4m, with £16m set aside to build the 80 affordable flats elsewhere.

The development was recommended for approval by council planning officers, who had questioned the developer claim that its profit level (dependent on its office space lease from the Department of Health) could range between a deficit of £52.3m to a surplus of £16m. “By contrast,” the council’s report said, “consultants conclude the profit surplus will range from a deficit of £1.2m to a profit surplus of £67.1m.”

However, the developer will be asked to hand over half of any excess profits to the council, who will use the money to fund its own social housing projects. The developers has also been told the pay the council a £7.35m Community Infrastructure Levy, of which 25 per cent will be spent locally.

“The applicant is proposing to only fund affordable housing to the value of £16.88m. We can see no justification in settling for the low value.

“The Officer’s Report offers a Viability Review as a solution to these differences and states that the applicant will make financial payments for more affordable housing, should the viability improve.

“We do not believe this justifies accepting the low figure offered by the Applicant in the first instance.”

London & Regional will be made to sign a deal to honour these agreements by December 16. It was also decided that the developer will not be obliged to begin construction for five years. Failure to do either will give the council power to withdraw planning permission.

A spokesperson for London & Regional said: “We are extremely pleased to receive planning permission which will deliver over 3,000 jobs and fuel growth in Elephant & Castle.

“We are very excited that we will be presenting Elephant and Castle with its first free and publicly accessible roof garden and a new performing arts venue, which will include community outreach programmes.

“There will also be significant improvements to the public realm, with twice as many trees, more open space and improved links, such as the new ‘Skipton Street’ providing a new pedestrian route from Elephant Square to London South Bank University.

“In developing our proposals, we have liaised with and listened to many local residents and community groups. There has been strong support for our plans and we look forward to continuing this dialogue.”

Councillor Mark Williams, cabinet member for regeneration and new homes, said: “The planned new development at Skipton House in Elephant and Castle will see an uninspiring office building replaced with more commercial space, a brand new cultural space, new housing and a beautiful, publicly accessible rooftop park. The benefits for the area are huge: job creation, increased business rates for the council to spend on services for local people, new homes onsite and much-needed social rent homes provided nearby, and payments from the developer for investment in the local area.

“The design also opens up the pedestrian route into Elephant and Castle with the recreation of Skipton Street. Although Southwark’s number one priority is delivering new affordable homes, homes alone don’t make a thriving area, and we want Elephant and Castle to function as a proper town centre and be a destination for work and leisure, as well as a great place to live.

“We would ideally like all new developments to achieve 35% affordable housing, and this is still possible with this development should profits exceed current estimates, but we should also recognise that it will bring many other benefits to the area.”

Demolition of the current site will also require the London South Bank University’s Perry Library to move, and a council-run homeless shelter in Keyworth Street to be relocated.

Southwark NewsNewsApproval for 421 flats in ‘Toblerone Towers’ for Elephant and Castle, but zero ‘on-site’ affordable housing