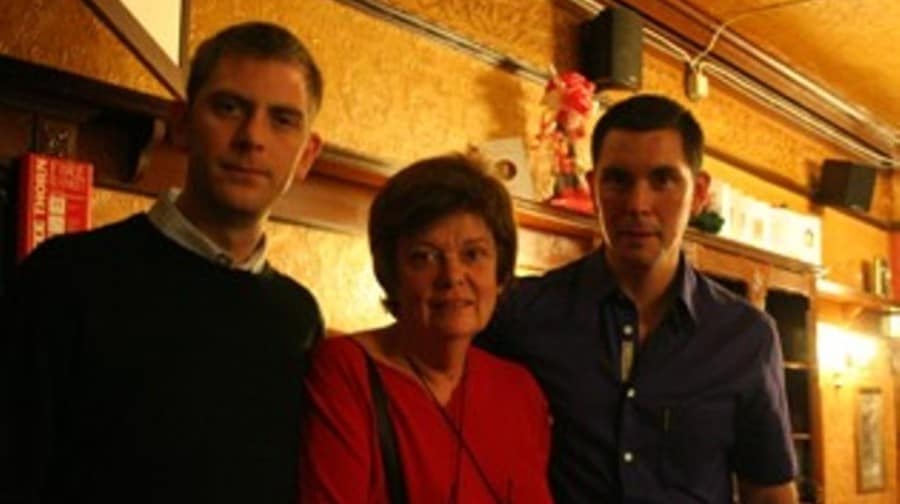 Jean Foster with her two sons, and Chris's brothers -Mark and Tony

Chris Foster’s mum has spoken out to condemn those who have chosen not to help police find the two men thought to have been involved in her son’s murder, in the face of a moving television appeal.

Last week’s episode of the BBC documentary series, MET Policing, featured the investigation into the 34-year-old’s murder in November 2013.

The police also released a CCTV image of one of the two suspects still outstanding in the case on the day the programme aired.

Aydin Salih, captured on camera at Heathrow airport, fled to Northern Cyprus after the botched revenge attack, which led to the death of an innocent man outside St Chrisopher’s Inn in Borough High Street.

He is one of two outstanding suspects thought to have been there on the night seven hooded men set out to take revenge for a previous knife attack and ended up getting the wrong man.

When Chris was killed, he left behind his daughter Christina, then four years old, who was shown in the documentary watching as her daddy’s ashes were scattered.

The episode of MET Policing aired on June 15

Jean Foster hoped the coverage would encourage anyone who knew who the two outstanding suspects were, to come forward with information.

But this week the police have confirmed that their fresh appeal was met with a stony silence and they have not received one single call since the programme went out.

Speaking to the News, Jean said: “I ask those who know anything to please come forward. Chris was a good person and a loving dad. Christina spent Fathers’ Day crying for him. If your son or loved one had been murdered surely you would want all those responsible brought to justice. By staying silent you are condoning their actions.”

Last year Salih’s cousin, Aytach Lisani, of Sir Francis Way, Brentwood, was found guilty of murder and three other men pleaded guilty to conspiracy to cause GBH to their intended target.

Anyone with information about Aydin Salih or  the other unnamed suspect is asked to contact the incident room on 020 8345 3865 or Crimestoppers anonymously on 0800 555 111.

Since her son’s “harrowing and painful” death, Jean has launched her own self-funded anti-knife campaign to get a simple message across – “think before you act.” Please visit www.cutitout.org.uk

Chris with his daughter Christina