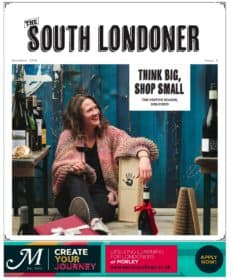 According to festive wisdom of the kind deployed in Dad’s direction by my mother every year, there are two types of people in the world: those who have cooked a Christmas dinner, and those who have not. I occupy a third category – those who’d love to try, but who are so terrible at cooking that it’s a medical necessity they don’t.
The kitchen and I have always had beef, mostly raw, inedible and served with a side of silent rage. If you want a burnt boiled egg, I’m your gal. When I threatened to do Christmas dinner as a joke last year, the family Whatsapp group fell silent, before one brother hurriedly announced that he’d actually be with his in-laws and the other hinted at an emergency conversion to Islam.
Since then, 2020 has happened. After a tough nine months, should anyone have to make The Dinner from scratch? Whether you’ll be isolating this Christmas, fancy treating yourself after one helluva year or, like me, don’t know your allspice from your elbow, behold: everything you should order in for the big day instead. 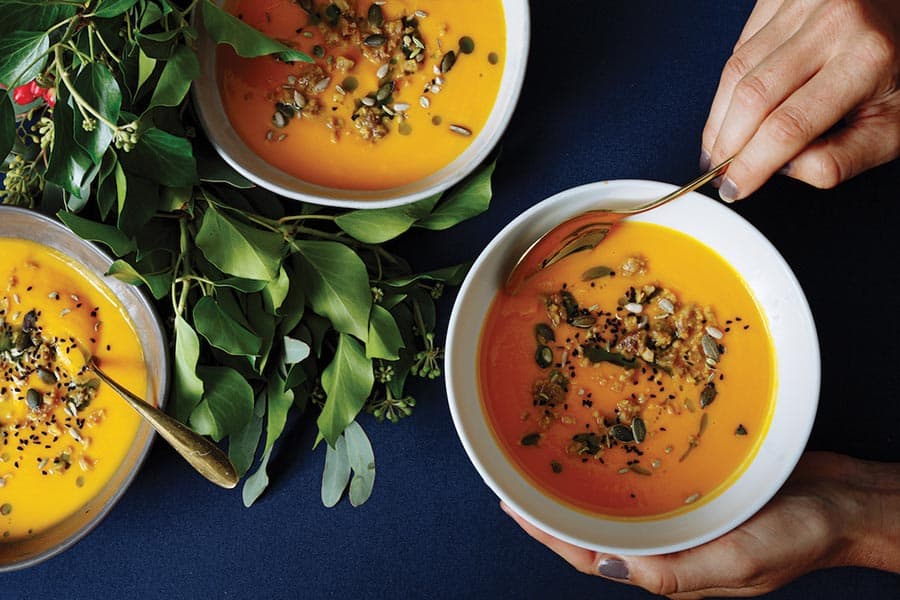 This exquisitely presented ‘festive dinner kit’ from Social Pantry is a present in itself – and one you can feel extra good about, given the company’s sustainability focus (all food waste produced from making your meal will be composted or pickled) and commitment to employing ex-offenders.
This feast requires a touch more input than Pickled Fork’s, (see above), like pouring things into pans, judging when something is ‘golden brown’ and a single bit of sprout sauteing; enough to bring me out in a cold sweat. But Social Pantry’s instructions are so easy to follow that another Christmas miracle occurs – I create a three course dinner in sixty minutes flat. And deck the halls with my clearly WRONG home economics report cards: it’s an absolute triumph.
We begin with spiced pumpkin, sage oil and maple-roasted seed soup. It’s sensational, tastes like a long walk on a golden Sunday and could be Santa’s aftershave – toasty, sugary and jolly all at once.
On to Persian squash roast with all the trimmings. The quinoa, pistachio and squash centrepiece is perfectly spiced, fragrant and mighty all at once and complimented by a cracking cranberry and orange sauce; imagine marmalade going to a rave. Vegetable sides – crispy roasties, heritage carrots and shredded sprouts with walnuts – are a chorus of delicate brilliance, and a cheerily colorful mix to boot. Everything on our plates looks and tastes impeccable, both supremely elegant and deeply satisfying. It’s Helen Mirren as a meal.
And as for Social Pantry’s duo of desserts – tell granny to brace herself for post-fondant bowl licking and a fight over the last minute pie, if the end of our evening is anything to go by.
From £70. social-pantry.square.site 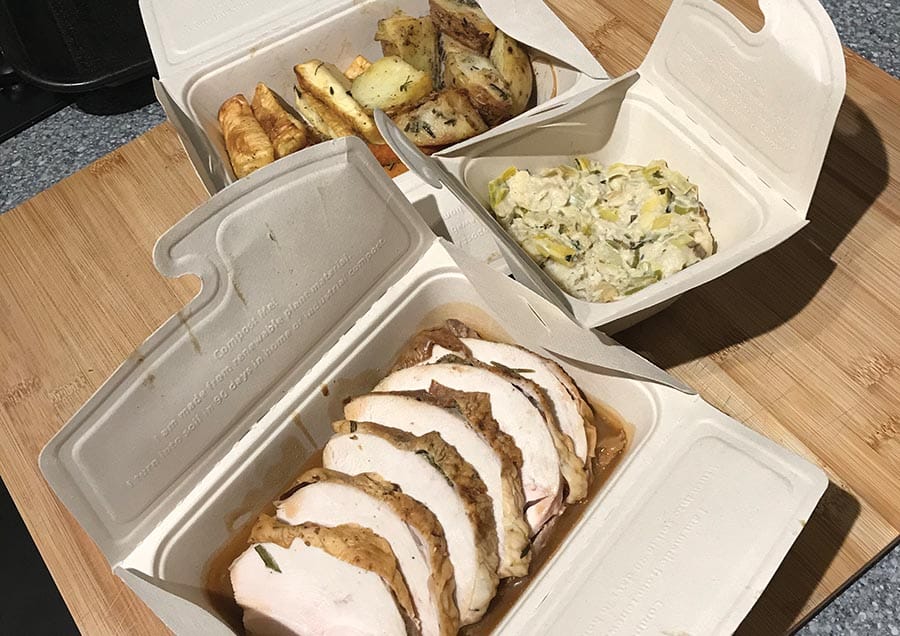 This Streatham-based catering company promises turkey and all the trimmings prepared by owner Alex Motture and his team of professional chefs. Arriving in ovenproof, biodegradable packaging, you don’t even have to decant the contents. An eye must still be kept on the clock, mind; as my partner delicately points out: “You find timings bizarrely stressful so you’re probably the right person to be trying this.” Never a truer word spoken. Normally preheating the oven has me so tense I can barely speak; tonight, I’m savouring a gin and tonic and having an actual conversation. In the first cartons go. This Christmas dinner malarky is a breeze! Let’s have another gin.
Ten minutes from serving up, things start to slip. Maybe it’s the drinks. Maybe it’s the ghost of kitchen disasters past. Maybe I literally cannot cook more than two things at once. Either way, warming up stuffing, sprouts, red cabbage and yorkshire puddings at the same time has me on the brink. But as we plate up, something magical happens: it looks like a Christmas dinner. Created in under an hour, by me. Kind of, and with extensive professional assistance, but still – LOOK AT MY ROAST.
And what a roast this is. The Pickled Fork’s turkey is moist, tender and comes with generous dark meat nestled under thick crown slices. The veg – rosemary and garlic potatoes, glazed carrots and honey and thyme roasted parsnips – is harvest fresh, packed with robust earthy flavours of the kind so often obliterated by ‘just cover it in fat, Graham, and get out’ Christmas strain. Stuffing balls are meaty, rather than mealy; pigs in blankets are full chipolatas dressed up in whole bacon rashers. I wasn’t convinced a Yorkshire pudding would travel well but by ‘eck, these crispy, [gravy-dippy] batter blooms have. And whilst the sprouts are as meh as ever – traditional, so not a problem – creamy leeks prove an unexpected hit. This is superb, sturdy food cooked with real flair. Don’t tell my Mum, but it’s one of the best Christmas dinners I’ve ever had.
From £75pp for three courses. pickledfork.com 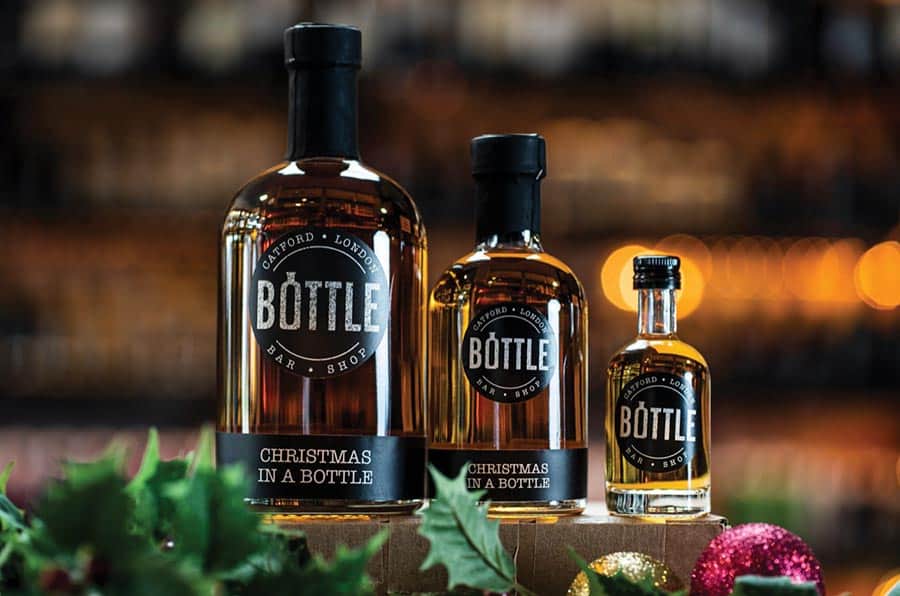 There’s no denying how easy this 8-week-infused tipple from Catford’s craft mixologists could make serving festive drinks. Pouring 100ml over ice and an orange slice seems feasible even several rounds in. I’m not usually a fan of vodka, after one too many teenage parties spent frantically downing own-brand varieties only for them to frantically race back up again, but I can confirm the above guesstimate to be true. Lighter, smoother and more refreshing than typical hedgerow-heavy Christmas flavours, this naughty elf could lead you, as it did me, very much astray. Finally, I understand why Boxing Day exists.
From £17. bottlebarandshop.com 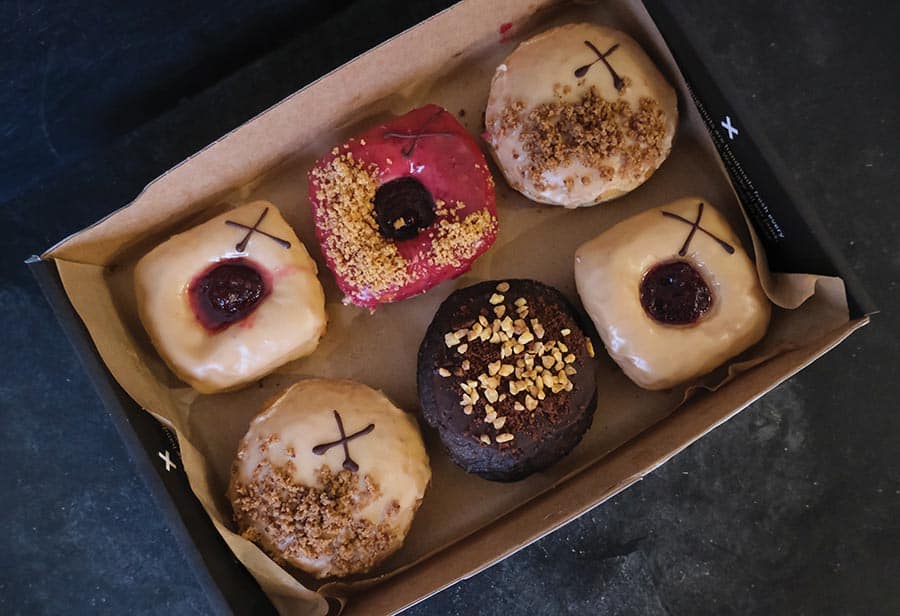 The fuss-free pudding – festive doughnuts and ice cream by Crosstown

Crosstown made their name with sourdough doughnuts and small batch ice cream. Their 2020 Christmas treats come loaded with single malt whiskey, brandy soaked festive fruits and even Japanese barrel spirits; and whoever came up with adding hooch to the mix deserves a knighthood, stat. A boozy bread ball might seem a stretch after a full Christmas dinner, but trust me: these are worth the elasticated waistband. Plus, all you have to do to ‘make’ them is open a box. That’s my kind of baking. We devoured both the cranberry and apple vegan offering – miles nicer than it sounds – and the undeniably moo-ey Magnum Whisky Cream without a whiff of a sugar rush afterwards, either.
Doughnuts from £4.50. crosstowndoughnuts.com