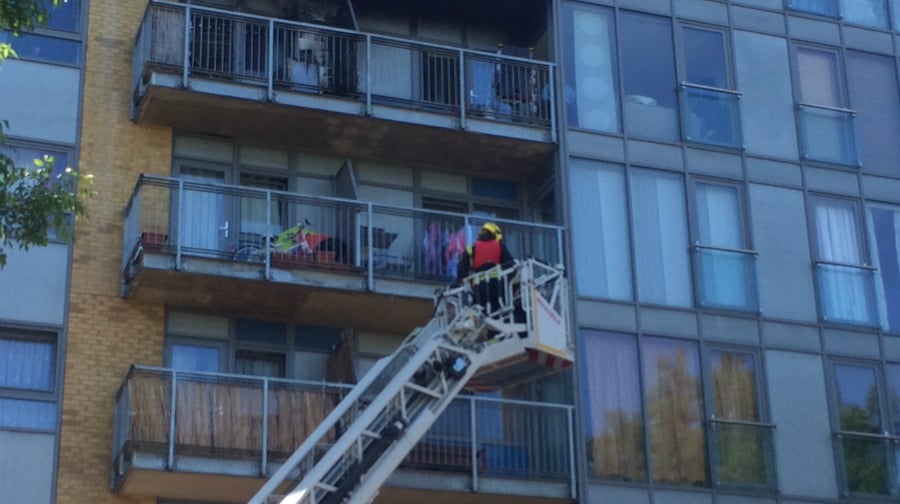 Firefighters at the scene

Firefighters battled a balcony blaze after the sun caused a cigarette lighter to explode, last week.

The flat’s resident, who only wanted to give her name as Kelly, got a call to say her flat in Flannery Court, Bermondsey, was ablaze on Friday.

Her three children were at school when the flames reached inside the flat on Drummond Road and started to rip through the curtains. As Kelly ran back from the Blue market she found firefighters smashing her door in to gain access and stop the blaze destroying her home.

Smoke marks on the charred balcony

“Thank God for the fire brigade. They got there just in time,” said Kelly, who was told later by a fire investigation team that the lighter she regularly leaves outside for smoking had been set alight by the heat of the sun. From there the washing line and nearby trellising caught fire and the flames had just reached inside the family home when the fire brigade arrived.

“Everything on the balcony got destroyed,” said Kelly, who said the housing office had been a great help in getting the fifth floor flat back to normal again. Kelly, whose birthday was on the day of the fire, and her neighbours, have now found a new home for their cigarette lighters. “I’ve been here nine years and I’ve always smoked outside. I didn’t think the sun would be able to do that,” she said.