Video: Jail for violent Southwark robbers who made off with £4.1 million of precious Le Vian jewellery

"There was no need for these men to have injured me the way they did," said the gang's victim, a salesman for Le Vian 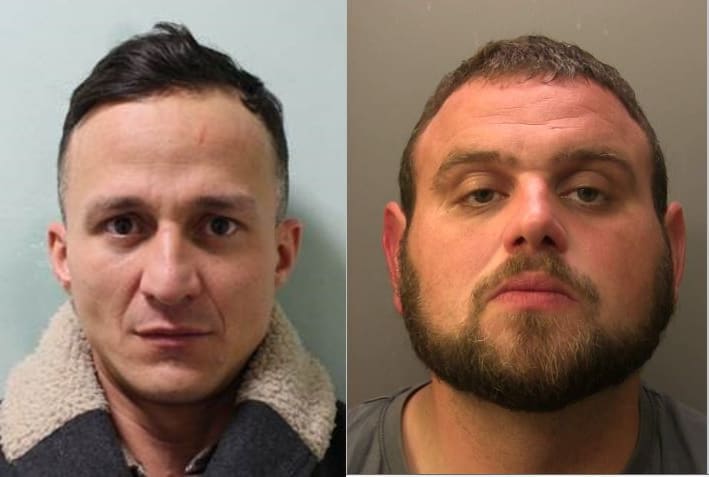 Jailed: Ciro Troyano and Oscar Hicks, both from Southwark

Two Southwark robbers have been jailed for attacking a salesman in a carpark and making off with £4.1million of precious Le Vian jewellery.

Pals Ciro Troyano, 40, from Elephant and Castle and Oscar Hicks, also from Southwark, must serve sixteen years and fourteen years behind bars for their crimes, which left their victim with long-lasting physical and psychological damage.

Lewisham man Camilo Carvajal, 39, and 48-year-old Lee Jason Gardner, of Tottenham, were also jailed for seventeen years and eighteen years for their parts in the brutal gang robbery in Staines.

Kingston Crown Court heard how the men set upon the salesman for American celebrity jewellery Le Vian after he’d parked his car on the first level of a carpark at around 8.20am on May 13.

He was opening the boot to take out a suitcase containing the precious jewellery when he was hit with such force he fell to the ground, before being repeatedly punched and kicked.

The gang tore off his watch, fracturing his wrist and lower arm, before making off with £4.1m-worth of jewellery. Some of the precious rings and necklaces

“I was left black and blue all over from the amount of punches and kicks I received. There was no need for these men to have injured me the way they did,” said the victim in a statement.

“I would have handed over what they were demanding without the need for violence.

“I also lost most of my possessions, including my clothes, phone, wallet, ID and passport, and was left stranded in a foreign country with nothing. Now I feel really vulnerable when I travel to the UK.”

Footage from the carpark’s number plate scanners captured the gang’s black Mercedes C Class tearing through the exit barrier at speed shortly before the robbery, the trial heard.

The plates had been stolen earlier that week from a Lambeth car.

Using CCTV footage and witness statements, police were able to piece together the car’s journey in and out of Staines, alongside the four men going to-and-from the car prior to the robbery.

They also found out that the car had been previously registered to Carvajal’s partner, and a blue Ford Fiesta travelling in convoy with the Mercedes belonged to Gardner.

Troyano had travelled to Maidenhead on 12 May 2019, the day before the robbery, where the victim was displaying the Le Vian range at an Ernest Jones store, it was discovered.

CCTV captured Troyano leaving and entering the shop and looking at a watch display.

Footage also showed that Gardner had travelled to Staines-upon-Thames on the same day to carry out a reconnaissance visit of the car park where the robbery took place.

Troyano was arrested in London in June and a search uncovered a phone, later confirmed as being the same one used during the offence.

Police said he had been trying to sell items of jewellery to local pawnbrokers following the robbery, including two distinctive Le Vian rings.

Gardner and Carvajal were arrested after simultaneous raids on their homes on June 25.

Officers say they found a “large quantity of Le Vian jewellery, cash and mobile phones” at Gardner’s place, alongside WhatsApp messages of him trying to sell the jewellery on.

A search of Carvajal’s address uncovered a distinctive Omega pen and pair of Omega sunglasses belonging to the victim.

Meanwhile, Hicks was arrested in July in London after coppers found medication with the victim’s name on it in a bedroom drawer.

“This was a brutal and deliberately targeted attack, reflected in the lengthy sentences handed out to all four men today, who all played their part in pulling off this professionally planned robbery,” said Detective Sergeant Kate Hyder, of Surrey Police.

“Unfortunately, the violence they inflicted on the victim left him extremely traumatised and has had a massive impact on his life. I hope that the fact that these men are now behind bars will provide him with some form of closure and help him move on with his life.”

Southwark NewsNewsVideo: Jail for violent Southwark robbers who made off with £4.1 million of precious Le Vian jewellery