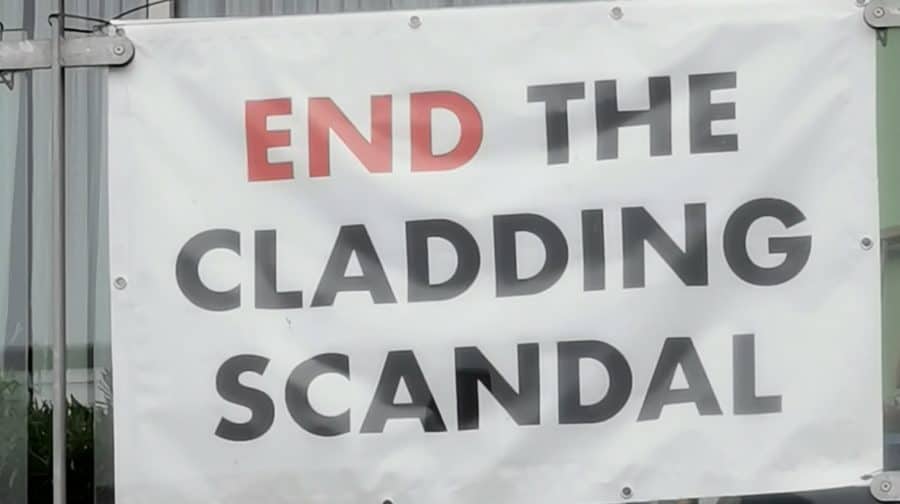 A banner on Peckham's Cooperative House

Even when cladding is removed and a block made safe, the pain is not necessarily over for leaseholders.

One key issue affecting homeowners is the difficulty of being able to sell or remortgage without an EWS1 form.

This document, which can only be completed by a specialist surveyor, confirms that the external wall and any cladding is safe, and that required safety work has been completed.

However, as we have reported before there is not only a huge number of blocks in need of these surveys, but there is also a shortage of people qualified to complete them.

Another key issue is that as building regulations have changed a number of times, some surveyors are reluctant to go ahead due to uncertainty over future amendments.

In some cases leaseholders were told their cladding was safe only for new regulations to mean it had to be removed after all.

Many banks and mortgage providers are now demanding EWS1 forms for blocks even under eighteen metres – which could take years to be assessed. In the meantime surveyors, who are liable, are struggling to get professional insurance.

Rob Glenny thought he was one of the lucky ones after Hyde Housing removed the cladding on the Bermondsey Spa block where he owns a shared ownership leasehold flat.

“As far as I’m aware it has been completely sorted and we’re not expecting anymore surprises but I think because the building regulations are changing all the time there’s always that possibility that there could be more issues,” he says.

But despite having no cladding and the block being safe, without an EWS1 form he is unable to sell up and unable to remortgage.

He is now paying an extra £900 a month after his provider changed his variable rate – money he can only stump up with help from his family.

Conceding he is fortunate to do so, he says the situation cannot continue long term.

“Some mortgage providers are essentially profiteering from a locked down market,” he said.

“I can’t move onto a better one because I don’t have a choice.

“Banks need to offer flexibility but the main thing is that it’s parliament that needs to fix this.

“Hyde isn’t the problem, they’ve acted well by removing the cladding and sorting it out.

“My partner’s business has been impacted by COVID and we’ve been running on credit cards for six months.

“The frightening thing is that this has been rumbling on for years. We were told the certificate could be completed by January, then April and now September but it could be far longer.

“It is such a scandal that millions of people are trapped.”

READ MORE: Cladding scandal – Our homes feel like a prison