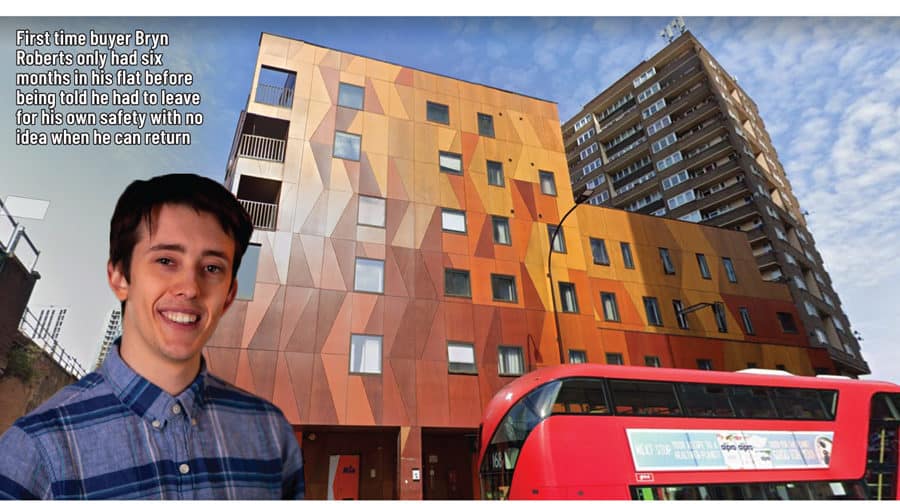 Dozens of households ordered to leave an L&Q block in Elephant and Castle over cladding fears have spent nearly two years and the entire pandemic living in temporary, rented accommodation with no idea when they can return to their own homes.

Bryn Roberts, a first-time buyer with a 35 per cent share in his Arch Street flat, had only lived in his newly purchased home for three months when he received the first letter about potential fire safety problems.

Six months after getting his keys, he and his neighbours were told they all had to leave for their own safety.

They were informed they would be rehoused with help from the housing association and council, with L&Q stumping up for their rent.

They would, however, be expected to continue paying their service charges and Arch Street rent.

The entire block was ‘decanted’ throughout 2019 and, as of February 2021 work had yet to even properly start on fully removing the cladding.

Bryn told the News he had no idea when in the process of completing the sale that such severe problems were heading his way.

“The EWS1 certificate was not around at the time,” he said. “Cladding never came up in the survey. I moved in in January and was out by July.

“We had a few face to face to face meetings where they went over the finance promises, saying we wouldn’t be out of pocket over cladding.

“It was quite a relief.  We were able to put our foot down when they first said they’d put us up in hotels, and we secured rented accommodation instead.”

Whilst praising L&Q for being flexible and paying up, he says there has never been a ‘concrete agreement in writing’ that the housing association will definitely cover all costs that could arise on work needed.

The only answers given about when they can move back into their own homes are ‘vague’, with letters referencing a possible return by the end of 2021 or 2022.

Bryn, like others, has had to make do with belongings in storage and handle the vicissitudes of the private rental market.

Although he was able to find a new flat, his previous landlord ended the tenancy in the middle of the first wave of COVID-19, leaving him scrambling to find a new home.

“It’s a big stress, he admitted. “Each time you move you’re taking more days off work. It takes a mental toll and has really impacted on my mental health. I have mixed anxiety depressive disorder and I live on my own too. Fortunately I still have my job but I don’t know what is going to happen with the flat.”

L&Q has a ‘buy back’ offer if people want to cash out their share. It is not necessarily an attractive proposition but for those worried about the cost of buying again, in a volatile market. Especially if, like Bryn, they are shared owners who would struggle to get on the housing ladder in Southwark with any other type of lease.

He says L&Q need to stop holding out for more clarity around government funding, and just get on with it.

“They are trying to minimise the costs but in the process are ignoring the human costs,” he said.

“L&Q need to give us some concrete dates and really consider the impact this is having on residents they are supposed to be looking after.”

A spokesperson for L&Q said: “We are sorry for the delay in providing an update around the cladding removal at Arch Street. The safety of our residents is our utmost priority, which is why they have been temporarily rehoused.

“After initial inspections found that elements of the cladding needed to be replaced, we have carried out further detailed investigations to identify the extent of the works required. This includes replacement of significant parts of the façade system as well as internal fire-stopping measures.

“Unfortunately, the building’s original developer has gone into administration, which has caused a further delay in carrying out these remedial works. We will let residents know as soon as we have an agreed timeline.

“In the meantime, we are covering any costs incurred from residents being rehoused.

“We appreciate that this is a very frustrating and stressful situation for our residents and are doing everything we can to support them.”

READ MORE: This scandal is far from over

Southwark NewsNewsCladding scandal: Homeowners forced to move out and live in rented accommodation for two years while remedial work stalls