Classmates of Millwall-mad Finley, 8, who has Cystic Fibrosis write to Prime Minister over lack of miracle drug Orkambi on the NHS 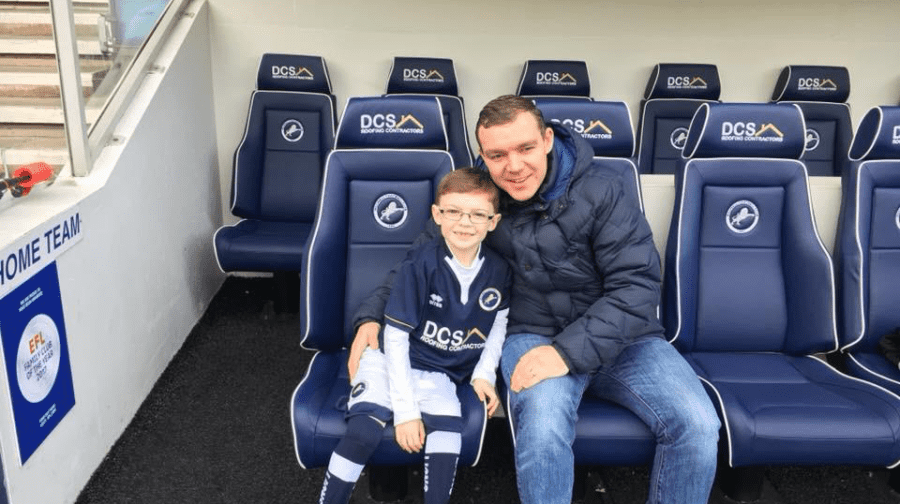 Millwall mad Finley, pictured with his dad, Wayne, will now finally get access to life-changing CF drugs like Orkambi

The classmates of a Millwall super-fan living with Cystic Fibrosis have written to prime minister Theresa May about his condition, after seeing his story in the News.

Finley Shoults, aged eight, would benefit from the drug Orkambi, which dramatically improves lung function for many people living with CF.

Although available in other countries, Orkambi is not available on the NHS in England amid an ongoing price row between NHS England and Vertex, its manufacturers. Finley on the pitch at the Den

Now Finley’s classmates at Barrington Primary School in Bexleyheath have written to Theresa May and Bexleyheath and Crayford MP, David Evennett, to ask why the wonder-drug isn’t available on the NHS.

“Our friend has got Cystic Fibrosis and there is medicine that can help him but it is too expensive,” read one of Finley’s pals’ letters, while another added: “Everyone should have the best medicine, even if it costs a lot.”

Teacher Tracey Kerr, who leads a Year Three class, said the idea came from the children after they read an article in this paper about Finley’s dad, Wayne, running a marathon for the Cystic Fibrosis Trust.

“Through the discussion I asked them, ‘what can we do about this’, and they decided they wanted to write to the PM,” she explained.

“A few of them were quite nervous, but they were very keen to do it.

“It was a golden opportunity not only to help Finley and other people with Cystic Fibrosis but also to teach the children about their rights and how democracy works in a real-life situation.”

The school is a ‘rights respecting’ school, Mrs Kerr said, which means children are explicitly taught about the UN convention on the rights of the child.

Wayne, Finley’s doting dad, said: “I wasn’t expecting that to happen, for the whole class to write to the PM, it’s quite nice.” Doting dad Wayne raised over £6,000 for the Cystic Fibrosis Trust by running a marathon with a dyed yellow beard

During his marathon run, the Millwall season ticket holder raised nearly £6,600 for the CF Trust, a charity which lobbies for improvements for those suffering from the life-long condition – partly thanks to the help he has received from Millwall, Wayne said.

Despite having to take forty tablets a day, alongside daily physio sessions and a recent hospital stay due to a lung infection, little Finley doesn’t let it get in his way.

The footie-mad youngster – whose favourite player is Millwall’s Jed Wallace – travels all around the country to see the Lions play and has even been in a TV advert.

“He’s very down to Earth about it all,” said Wayne, who grew up in Walworth before moving with his childhood sweetheart Dannielle to Welling. “He just gets on with life.”

The children have now received responses from the prime minister’s office and Mr Evennett for their letters.

The prime minister’s office praised the children for their “excellent” letters, saying it was “clear you care a great deal about your classmate and all those affected by cystic fibrosis.”

A spokesperson for the office said the letters would be sent to the department for health and social care which ultimately has responsibility for matters relating to CF.

Meanwhile Mr Evennett also thanked the children for their letters and asked for further details so that he can raise the case of Finley and other CF sufferers with the authorities.

Southwark NewsNewsClassmates of Millwall-mad Finley, 8, who has Cystic Fibrosis write to Prime Minister over lack of miracle drug Orkambi on the NHS