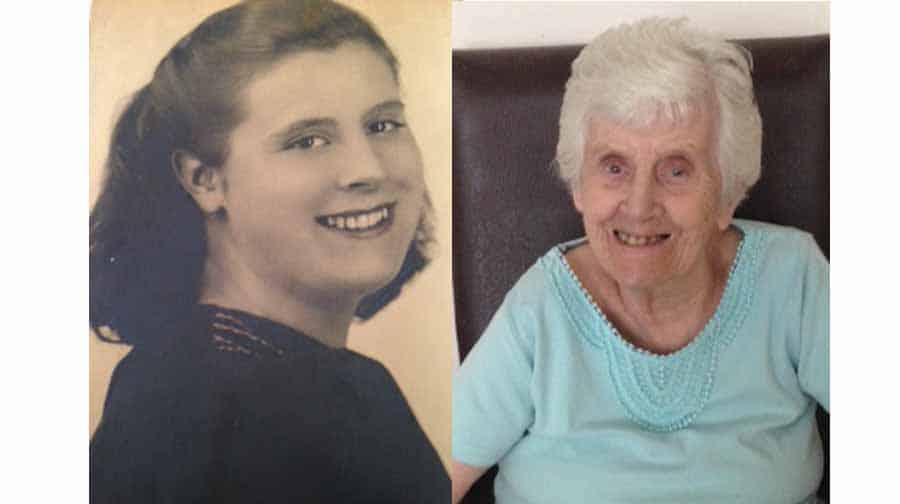 Ninety-six-year-old Maisie Fruen’s early life and love was characterised by war, her final departure, however, was a shock to her family – convinced she would outlive this global pandemic.

The Bermondsey pensioner was sprightly – despite being wheelchair bound with osteoporosis, “she was bright and articulate and had a great memory,” he daughter Jean Wilson told the News.

Maisie’s death on April 27th at St Thomas’ Hospital came as shock because she was not even showing obvious signs of the coronavirus when she was admitted. “She had a chesty instead of a dry cough and we spoke to the doctor, who put her on antibiotics,” Jean explained.

“After she was found on the floor having had a fall on the Friday I stayed with her the whole weekend before returning to work on the Monday. But when she started showing a high temperature on the Tuesday paramedics were called and at the hospital they diagnosed mum with coronavirus.” From the beginning of the outbreak Maisie and Jean were extra careful. “I would shower and put on a mask, disinfect everything including the shopping with diluted bleach. Mum wouldn’t even go to the front door and typically she was more worried about me being safe. When she had the fall she refused to go the hospital, saying ‘no, other people need them more than me’. Mum had the same two carers all the time, she loved them and they loved her.” And despite the huge amount of time that the mother and daughter spent together at Maisie’s Amina Way home in Bermondsey, Jean has tested negative for the virus.

A fierce knitter and trained ladies’ tailor, Maisie’s mantra was certainly not ‘a stitch in time saves nine’ when it came to her only child Jean. “Mum always knitted and made shawls and everything for the whole family. But I’m hopeless, always have been, but in mum’s final weeks I had decided to try again and the pair of us sat down knitting. I said, ‘let’s do squares and if I muck up you can help and we’ll do a scarf – if we do a load we’ll make a blanket.”

This domestic setting was typical of Maisie, who enjoyed nothing more than being around her family, having two grandsons and three great granddaughters. Jean’s cousin summed it up writing from Spain, “was thinking of auntie’s knitting, all benefitted from that at some point … then how about the baking, mince pies especially liked the ones she made that had short crust bottoms and puff pastry tops, I’m salivating as I’m writing.”

Born in 1924 in Bermondsey, the eleventh of twelve children, Maisie worked in many of the area’s factories, including Shuttleworth’s chocolate and Atkinsons perfume. During the war she was billeted to Staines to make components for bombs. But that was not before she caught the eye of a Bermondsey sailor called Tom, who lived just streets away and was a neighbour to pop legend Tommy Steele on Frean Street. “Dad wrote letters to mum after just seeing her. At first she thought about not writing back, but my Nan persuaded her otherwise and throughout the war they wrote back and forth,” Jean recalled. “Going through her things the other day I saw a photo of her that I had not seen before, one she’d sent to Dad and on the back she was saying how she loved him.” Tom was out with the Royal Navy protecting the merchant ships, which was a dangerous task and although he was smitten he refused to get married until after the war was over, worried that Maisie would be a young widow. However, he did from the start always buy her pies. “Mum would go to the arch to shelter from the bombs and there was a pie stall there, and Dad would always have a pre-paid pie bought for her.” In 1947 when they did finally get hitched the pair lived in Lucey Road in two rooms with the cooker on the landing until Jean was aged eight  when they moved to Peckham. “But they always felt they were on the wrong side of the Old Kent Road,” Jean laughed. And when Tom passed away in 1992 Maisie jumped at the chance of an offer to return to her beloved Bermondsey. “We were such a tight-knit family and my little mum was a constant, we all thought she get to the 100 no problem. Mum loved everything to do with family, we’d always go and stay with my nan over Christmas on the Neckinger Estate, even when we were just a street away living in Lucey Road. I laugh at it now, but that was just the way it was.”

Maisie’s funeral is being held this Friday, May 15th, at Honor Oak.