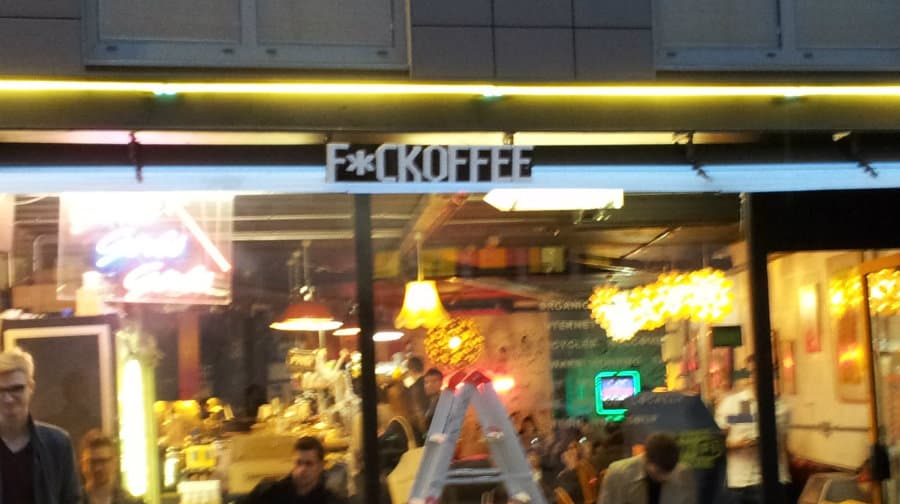 Bermondsey’s most notorious coffee shop has been forced to re brand after lawyers told it to change its “offensive sign.”

F**koffee, located in Bermondsey Street, will now be known as F*ckoffee, after owner Adrian Jones stood down in the face of legal pressure.

He said: “We’ve had the sign for two years and there have been a few complaints but it’s just a bit of fun. I think Bermondsey Street is the only street were you could pull this off, there aren’t any schools or anything.

“What I’m upset about is how they went about it. AM Surveying could have phoned us and asked us to take us down, but they went straight to the legal side. My solicitor couldn’t really offer us any advice as he said it was a completely unprecedented case.”

The coffee shop, which was previously known as Bermondsey Coffee before adopting the cheekier moniker in 2013, has seen a 20% spike in sales since they posted the legal letter on Twitter, sparking outrage from customers and residents.

A petition, now signed by nearly 350 people, said that the coffee shop should not have to change its name just because of “a few anally retentive and gormless people.”

It added: “We, the undersigned, confirm we have a sense of humour and find the continued attack on our beloved F**koffee an insult to freedom of expression, freedom of speech and humour.”

Matthew Mackintosh, director of AM Surveying, denied that they were being “draconian” by ordering the removal of the sign.

He said: “The media are missing the point – this is actually about trespass. It doesn’t matter what the sign says, they don’t own the area they have put the sign, it is outside their lease. It would be like putting a sign up in your neighbour’s garden.

“We were happy to overlook the sign but there has got to be a limit. When we began receiving complaints we had to take action. We’re not trying to be draconian, but we have our limits, and the limit here is profanity.”

He added that he would soon be visiting the shop, which uses fair trade growers in Papua New Guinea, to check that the sign had indeed been removed.