Comedian and musicians want to keep Half Moon as live venue 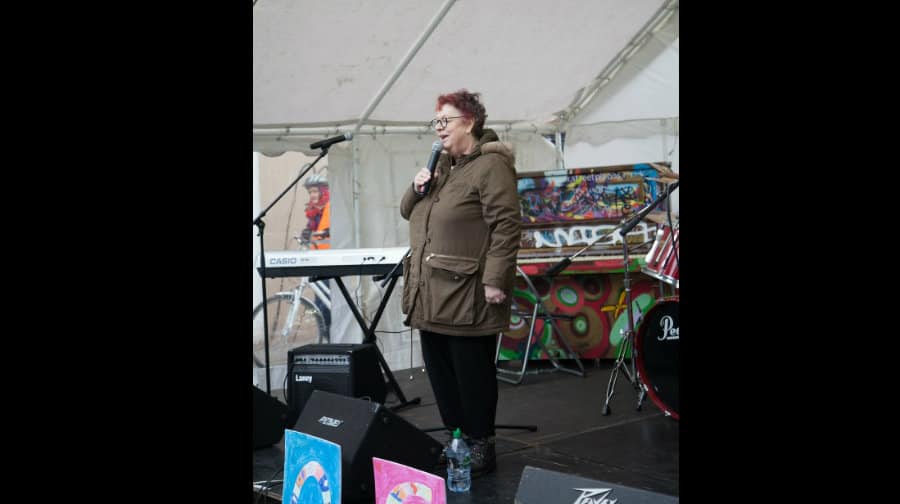 Comedian Jo Brand joined over one hundred Herne Hill residents last week at a musical protest against the removal of live entertainment from the iconic Half Moon Pub.

The mini festival was organised by campaigners furious at plans by leaseholders Fullers to convert the pub’s stage into a restaurant and kitchen area.

The pub’s musical heritage dates back decades and includes live performances by U2 and The Police, as well as shows by Ms Brand and other comedy headliners. It is scheduled to reopen in late summer for the first time since it was devastated by a flood in 2013.

Ms Brand said at the event: “I’ve lived in the area since 1978. Live music and comedy are an essential part of our community. Herne Hill is vibrant and needs this venue. You can see it happening – music is taken away, one piece at a time, until in the end it is lost forever.”

The protest included a musical performance by DJ Food, O’Connell & Love from Alabama 3, who wrote and performed the  theme tune to the TV show The Sopranos.

DJ Food said: “I played the last night that the Half Moon was open, and we are now reduced to playing on the street, when there is a perfectly good venue just round the corner that could’ve hosted this festival.”

The protest was also attended by two candidates for this May’s London mayoral election. Lib Dem Caroline Pidgeon promised to drive through an “agent of change amendment” to protect venues like the Half Moon Pub if she was elected, while the Green’s Sian Berry said the loss of the venue’s music area was “a tragedy.”

A spokesperson for Fullers said: “There has been a lot of focus on live music – and we do understand that there are some in the local community who feel that the pub should bring back live music in dedicated surroundings.

“However, we do not believe that the pub is economically viable with a strong focus on live music and we are not experts in late night entertainment.

“We are, however, experts in superb, well-run pubs that cater for a broad section of the community with an excellent drinks range, delicious, fresh food and outstanding service. This, we believe, will secure the long-term future for the pub, the pub’s employees, our customers and the wider community.”

Alabama 3 performing at the protest