'She saw the advantages of giving a sense of camaraderie, training and adventure to help these boys get out of the conditions in which they were living' 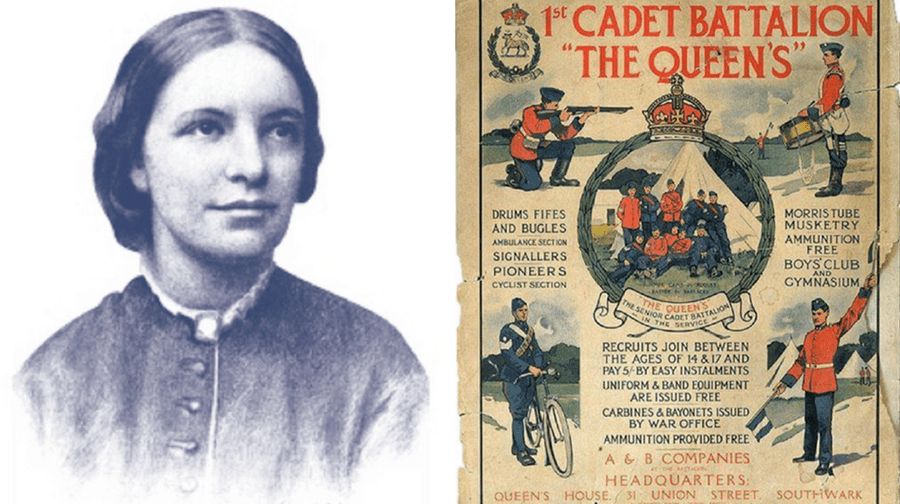 A commemoration service at Southwark Cathedral will celebrate Octavia Hill’s work in setting up an Army Cadet Force unit and improving the lives of many young boys in the borough.

The social reformer helped set up an organised boys’ club with a military-style structure in Red Cross Way in May 1889.

The Army celebrates the cadet force as beginning in 1860 when Britain feared it was under threat of French invasion and began recruiting volunteers and forming Cadet Companies. However, Octavia saw the benefits of cadet training and set up the first independent Cadet Battalion in London in 1889 which was the forerunner for the modern Army Cadet Force as it is today.

The idea of the cadet unit was for it to improve the education, self-discipline and confidence of boys in socially-deprived areas of London such as Southwark – rather than just as a traditional recruitment service for the Army.

As the unit was set up in the recruiting area for The Queen’s (Royal West Surrey Regiment), it adopted this regiment’s badge – a Paschal Lamb with the Flag of St George.

Speaking to the News, Colonel John White, Commandant of Surrey Army Cadet Force, explained Octavia was instrumental in getting a derelict factory site in Red Cross Way turned into a community hall, alms houses and gardens, where she based the unit.

“She started a boys’ club and saw the advantages of military-structured training so that’s why she then took the concept of the cadet corps and used it as a structure to provide a form of socialising and training for the young poor boys of Southwark, because many of them had had little or no education and were living in slum conditions,” said Colonel White. “She saw the advantages of giving a sense of camaraderie, training and adventure and doing things like you did in the Army such as camping, shooting, going to Army camps in country areas and down at the coast, so she wasn’t creating the army cadets now to be a structure purely to recruit boys to the Army or reserves, she was seeing it as a structure to help these boys to get out of the conditions in which they were living.

“They were living in awful slum conditions and they took pride in wearing their uniform and it did have an influence on some of them; some went on to join the Army but Octavia Hill’s purpose wasn’t to provide a recruiting ground for the Army, it was just to use the structure to give a sense of pride and respect to the boys.”

The hall, built at Red Cross Way, was used by the cadets in wet weather and there was an open air drill ground, but Red Cross Gardens was also opened as a space for the public where they could socialise, children could play, and they could enjoy better air conditions.

Colonel White still has an original register which lists all of the cadets who enrolled between May 31, 1889, and June 1891.

“They had to pay an initial sixpence in old money and then one penny until they paid a total sum of two shillings sixpence and this money would be forfeited if they were expelled for bad behaviour or resigned within two years,” he said.

The Army Cadet Force celebration of Octavia Hill will be held at Southwark Cathedral at 11am on Saturday, June 2.

The service will be followed by a parade and procession outside, which will include visiting Red Cross Hall and Garden.