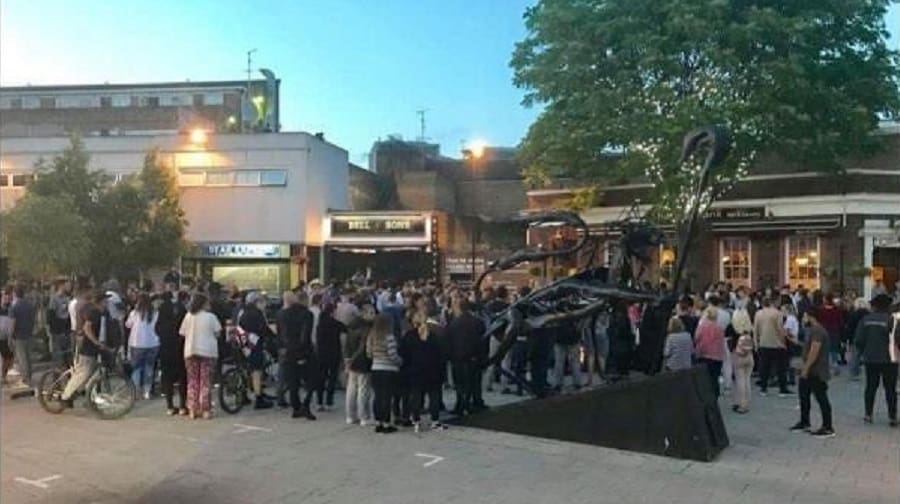 Despite police announcing the death of a popular 23-year-old man who was stabbed in broad daylight in Bermondsey, his family are maintaining a vigil at his bedside as he remains on life support.

The family were still praying at his hospital bedside today, Wednesday, and more than 200 people came together to stage their own vigil in the Blue Market square in Bermondsey last night.

On Monday, the News reported that the man, who was stabbed in Lucey Way on June 11, had sadly died after police launched a murder investigation and announced that he had been pronounced dead at 11.20am that day.

However, the brother of the young man, who we have agreed not to name at his family’s request, said the 23 year old was still on life support and his heart was beating on its own.

Speaking to the News today, the man’s brother said: “They did a response test where they tested his response to certain things and he didn’t respond.

“He didn’t pass the brain stem test, therefore from a legal stand point he is dead.

“Obviously in medical terms there’s nothing more they can do for him but we said let’s wait until his heart stops and he passes away himself.

“He is still on a life support machine but his heart is still beating on its own.”

He added that his family was meant to travel to Canada last Wednesday for a relative’s wedding before his brother was stabbed two days before.

“Half of our family is in Canada waiting on news,” he said.

The 23 year old’s family asked the community to keep the faith and to keep praying for him.

“Everyone in the community still has a bit of hope and that’s all we want until he decides to go,” his brother said.

Police and ambulance crews were called to a residential address in Lucey Way at about 6.21pm on Monday, June 11, after the 23 year old was stabbed.

Detective Inspector Ian Titterrell, who is leading the murder investigation, said: “At this early stage, we believe an altercation involving a group of males began outside Helen Taylor House in Linsey Street.

“The victim then took shelter at an address on Lucey Way after being attacked.