The community march will begin at Stave Hill steps at 11am on Sunday, June 24 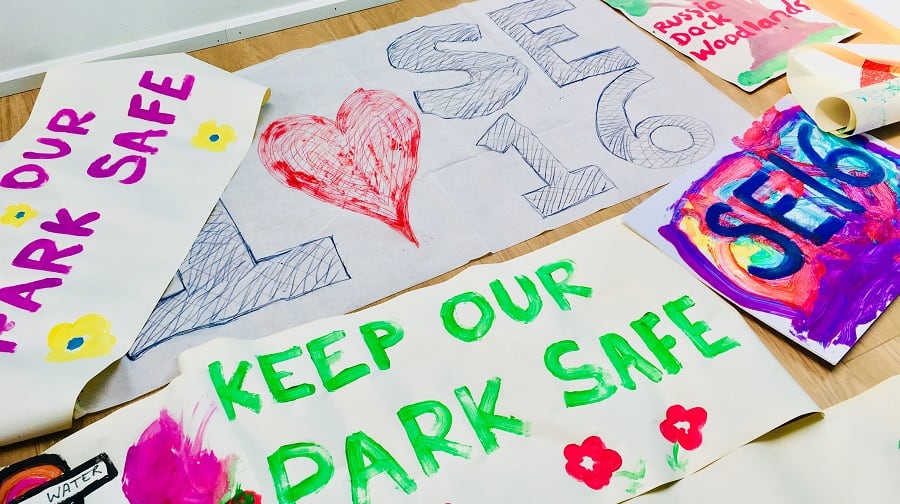 Banners made for a community march to "reclaim" Rotherhithe

Residents will come together for a family-friendly march on Sunday to “reclaim” their area after a string of muggings and knife crime.

The peaceful demonstration has been organised following a number of incidents around Russia Dock Woodland and Stave Hill Ecological Park, including a robbery involving two women who were walking through the park with their children on June 1.

A 22-year-old man was later arrested on suspicion of robbery and bailed pending further inquiries to a date in late June. The director of fitness group Bootcamp SE16, which is based at Stave Hill Ecological Park, has launched self-defence classes for residents as a “direct response” to the incident to teach people how to manage conflict in certain scenarios.

The community march, organised by the Canada Water Safety Network, will begin at Stave Hill steps at 11am on Sunday, June 24.

Claire Nash Thurlow, joint co-ordinator of the march and the Canada Water Safety Network, said: “We’ve had such a great response to the march event and the safety network group from across Rotherhithe, Canada Water and also Bermondsey. People want to do something constructive.

“People are concerned and unhappy with the level of policing resources but they understand what the constraints are and why. “The community wants to help the police to help themselves – not just by reporting and logging crime but by sharing information with each other, offering support and advice.

“We also want to promote youth services and positive initiatives that engage our kids, and signpost more clearly what is available to them.

“There is a perception that good projects, including youth clubs – even something as basic as where an adventure playground is – are not flagged up enough.” Redriff Primary School headteacher Mickey Kelly, Sergeant Bill Lowden of Southwark Police, and Bermondsey and Old Southwark MP Neil Coyle are all expected to speak at the event on Sunday.

The organisers hope they will also be joined by cycling pressure group Bikestormz of the Bikes Up, Knives Down campaign.

The route will begin at Stave Hill and head to Deal Porter Square via Albion Channel, then back the same way to Russia Dock Woodland.