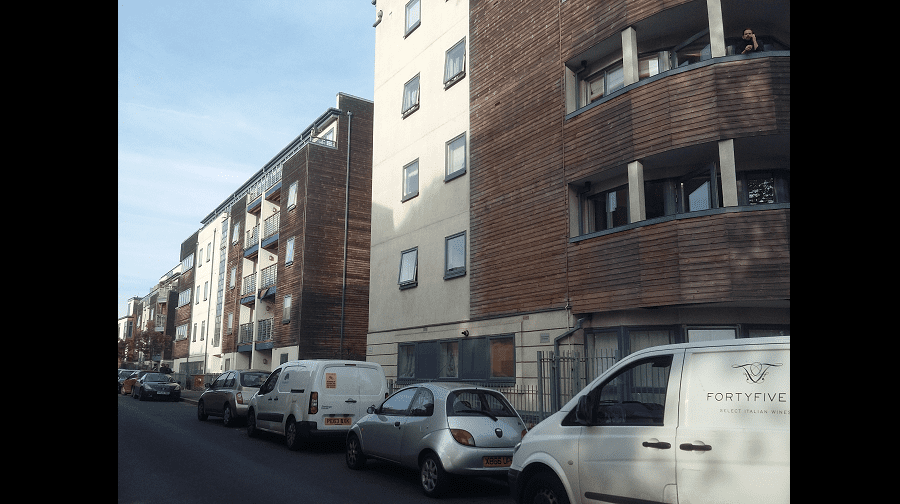 Peckham families in four blocks of flats have been given eighteen months to find new homes, after the buildings were ordered to be demolished or refurbished only six years after they were built.

Residents of the 85 flats in Solomon’s Passage, off Peckham Rye, owned by Wandle Housing Association, have said they were “heartbroken” when they heard the news on April 25.

The housing association has confirmed to the News that independent investigators discovered “significant problems” and “defects” such as water damage to the four buildings’ timber framework.

Several residents told the News they had complained to Wandle since 2011 of problems such as flooding in the basement car park, and cockroaches getting into ground-floor flats. Wandle say they “started receiving” complaints in 2013.

Residents say they feel “scared” as they have been told not to use their balconies, while wardens have been commissioned by Wandle are patrolling the blocks carrying out fire safety checks, and extra fire alarms have been installed.

Wandle have confirmed that of the four buildings, blocks 40 and 46, at either end of Solomon’s Passage, will first be refurbished, leaving blocks 42 and 44 to be demolished and then rebuilt. Blocks 40 and 46 are home to leaseholders and part-ownership residents, while blocks 42 and 44 are occupied by private and social-housing tenants.

Many whom the News spoke to were furious. One concerned mother who has lived there since 2010, said: “My son is a pupil at Ivydale Primary School, he cried when we told him. All his friends live in the area and he doesn’t want to have to move school.

“I thought we would stay here forever. We have worked so hard and spent so much money to make this flat ours, and it’s all going to go down in rubble. I have built my life in this area and our kids are have just settled in.”

The mum also said that among the many complaints she had made to Wandle since 2011, some were of flooding in the basement car park, which attracted cockroaches.

“It’s also the way they broke this to us,” She said. “At no point before the meeting [on April 25] did they say it was going to be about demolishing the buildings.”

Residents who spoke to the News outside the flats said Wandle had not told them about the “fire wardens”, however a spokesman for the association has said leaflets were distributed in residents’ flats with a short notice about the presence of fire wardens in October last year.

A statement from Wandle said: “During the early investigations it became apparent that the fire protection in some areas could be improved. It was recommended by our independent fire expert (Building Research Establishment) that we provide additional fire protection measures whilst we continued to do further investigations.

“Following the completion of the investigations, no further risks were identified and the London Fire Brigade continue to be confident that the buildings are safe.”

The concerned mother also questioned why only the blocks of flats with social tenants were due to be demolished, while the lease holders’ and shared-ownership blocks (40 and 46) would be refurbished.

Wandle responded saying although the buildings “aesthetically” appear similar, block 46 is an exception because it is built with reinforced concrete between the Ground and First floor, while block 40 is built on separate foundations. Their plan of action, Wandle said, was recommended to them by an independent construction company Keegans Ltd.

Despite the upheaval, the housing association said it would be appropriate for residents to continue paying rent and service charges to cover the “continued day-to-day running of the buildings” but that no costs associated with the investigations, defects or refurbishments are being passed on.

As compensation, all residents are being offered a “disturbance allowance” of up to £3,000 to cover moving costs. Those who have to permanently move will be entitled to a “home loss payment” of £5,300.

London Fire Brigade were contacted, and a spokesman told the News that the brigade they have not given any enforcement notices on the building, and that it is the parties responsible for the building, who are required to carry out a mandatory detailed fire risk assessment identifying the risks and hazards in the premises. Some residents also queried whether Southwark Council, who give planning approval and carry out building control inspections, may have questions to answer. A council spokesman said: “The council’s building control team is responsible for making sure the proper materials are used during the building process and making final checks on completion to ensure the building regulations are met. Over 40 inspections were made throughout the building process and these checks were completed.

“However the team is not responsible for quality control or overseeing workmanship, this is down to the developer who would normally, as in this case, employ a clerk of works on site to oversee workmanship.

“This is what has failed in this instance and what Wandle are pursuing with the builders and not the council.”

What Next for over 200 residents?

A Wandle spokesman outlined the options available to residents: “[Those whose flats are waiting to be demolished] can stay put where they are for at least 18 months while the other blocks are refurbished.

“At that point they can move into the newly-refurbished blocks. For those who can’t, we will move them to other Wandle properties or we will match the cost of moving them into the private-rented sector.

“For lease holders who want to move out, we’re offering to buy back their property at market-value rate plus ten per cent uplift.

“We’re speaking to on a one-to-one basis to find out their needs and how we can flex those options to try to make this as seem-less as possible.”

I have every sympathy for these people, several of whom I actually know personally. The issue isn’t so much the jerry building of the flats, it’s more the fact that Wandle have known about this for some time and been quite poor at keeping residents informed. Added to this, there is the very real risk of the buildings being fire hazards as the electrical wiring isn’t to code and is dangerous. The fire prevention systems don’t work, hence the wardens. It’s pretty shoddy. I understand that 2 building companies responsible for this mess have gone bankrupt. I would personally be campaigning to get the law changed so that building company directors can be personally liable for this kind of gross misconduct and fraud, even if the contracted company that built a condemned structure has gone into receivership. I would also be taking a very close look at the Buildings Inspector from Southwark as he’s either incompetent or bent if he passed these flats with that number of faults. BBC Watchdog?

What a surprise that the social housing flats were built to lower standards.

BTW, the word is seamless, ie without visible joins. It’s not about about “seeming less” as your writer seems to believe!