Confessions of a pig in sh*t: PC tells all in new book

Former police officer Kevin Holland writes about his time policing the Aylesbury Estate after Tony Blair's infamous speech in 1997 about a 'forgotten people'. 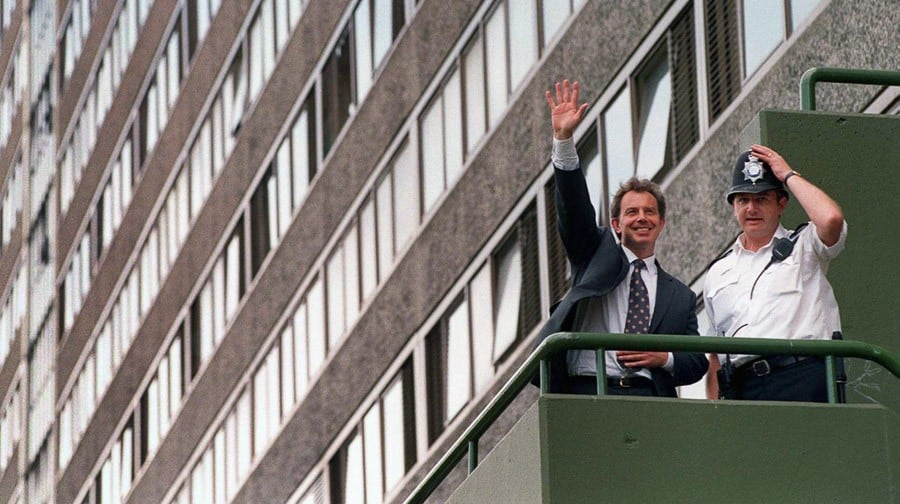 A retired copper has confessed all about his life on the beat patrolling the Aylesbury Estate in the 90s in a new book called A Pig in Sh*t.

PC Kevin Holland was pictured alongside Tony Blair delivering his first big public speech after being elected in 1997 and the pair were plastered all over the front pages the next day.

“Those minutes changed my life,” writes Kevin, “and also changed the lives of the people I policed for the better – hopefully forever.”

Kevin did not waste any time milking the publicity for all it was worth, securing among other things a brand new basketball court for the estate, where he says he was as happy as a pig in the proverbial.

By then Kevin had already been policing the Aylesbury for three years, where he learned how news travels fast on the gossip grapevine.

He found him in a corridor where he held the knife out and said: “come any closer and I’ll stab you and me” so Kevin stayed where he was and “talked him to tears.”

Passing the time with an elderly lady one morning he remarked that he was going to see a man who had been robbed in Missenden block. By that night, he was being asked about an old boy who had been stabbed to death by masked intruders on Missenden. When he asked where this information had come from he was told “I heard it in the hairdressers from a woman who overheard a bloke in a cafe down the road from the bookies where a woman spoke to a policeman on the estate first thing this morning.”

But Kevin used the Walworth whispers to his advantage when he was trying to stop drug dealers using the lifts to tout their trade. He told one of the kids on the estate not to tell anyone that there were cameras hidden in the lift buttons. No more dealing in the lifts.

Kevin kept the kids on the estate in check by convincing them he was a mind-reader with the help of a dentist mirror.

Turning his radio off, he would creep down the stairwells and use the mirror to peep round the corners without being seen.

“I would watch who had what and where,” before jumping round the corner to “scare the daylights out of them.”

“It was about letting them know I was there and right up their arses so they were less likely to do anything. I would say: “you – red lighter, right front pocket” or “you – pen-knife, back left” You should have seen their faces when I was right.”

But Kevin’s ‘get stuck in’ approach led him into two life and death situations where he tried to save someone’s life and nearly lost his…two nights in a row.

On the first night he responded to a bail hostel in Camberwell where a man was threatening to kill himself and police officers with a knife.

Kevin stormed past the other officers waiting outside for bigger shields to talk the man down single-handed. He found him in a corridor where he held the knife out and said: “come any closer and I’ll stab you and me” so Kevin stayed where he was and “talked him to tears.”

He was supposed to be taking it easy the following night when a call came in that a drunk man was threatening to throw himself off  Kelvin House on the  Comber Grove estate. Kevin was first through the door again to find the man on the wrong side of the glass balcony fourteen floors up.

Kevin grabbed the man in an attempt to pull him back over the balcony to safety but the man let go and instead nearly took Kevin with him. Another officer reached over and pulled the man up, saving both of them. “I nearly went over myself that night and started to think about not trying to be so bloody brave in future,” writes Kevin.

Kevin even had kids from local gangs planting and naming trees on the estate. “Guess what? Criminal Damage related incidents disappeared over the next few weeks. Amazing what can happen if only you use a bit of common sense.”

As well as helping Kevin “grow up as a police officer and as a man” these incidents also earned him a Commissioner’s Commendation for bravery and a bit of respect from the fans at Dulwich Hamlet where he was the club’s community liaison officer and eventually Vice Chair.

At his first fan forum meeting he was pleasantly surprised that instead of discussing formations and budgets, the down-to-earth Hamlet fans were more interested in when there would be a shelter over the tea bar and if they could have onions with their burgers.

By throwing youths inside the boxing gym instead of the cells, Kevin also ended up Vice Chair of the Lynn and was a well-known face at Henry Cooper’s place above the Thomas a Beckett. When new pub owners closed that gym down to open a restaurant upstairs, Kevin became co-owner of The Henry Cooper down the road and started fraternising with the pro champs like Howard Eastman and Danny Williams.

When the boxing gyms were closed, the kids on the Aylesbury could still give the local coppers the run around. Like when they stole the go-karts from the track in Burgess Park and raced them around the estate’s walkways, outpacing the police at every turn.

“Your bloody kids Holland,” Kevin’s weary colleagues said the next day. “Apparently it was mayhem,” writes Kevin “….lots of sweaty coppers running all over the place who couldn’t keep up. Brilliant! As wrong as it was you have to laugh.”

Not to be outdone by the Barbican, which Kevin described as a “posh Aylesbury” he sowed the seeds of the Aylesbury in Bloom annual competition. He threatened the Buckinghamshire villages that the blocks were named after with a visit from a rabble of inner-city kids unless they donated to the scheme and raised £1,500 as a result, turning the estate into the “Hanging Gardens of Babylon.”

“The Aylesbury in Bloom went on for as many years as I policed the Estate,” writes Kevin, “and it was great fun….Some days you could walk around and all you could hear were birds singing…”

Kevin even had kids from local gangs planting and naming trees on the estate. “Guess what? Criminal Damage related incidents disappeared over the next few weeks. Amazing what can happen if only you use a bit of common sense,” writes Kevin.

After resigning from the police force in 2005, Kevin moved to Norfolk and now runs a solar energy business.

His book Kevin Holland A Pig in Sh!t is available from Amazon for £7.18.

Southwark NewsNewsConfessions of a pig in sh*t: PC tells all in new book