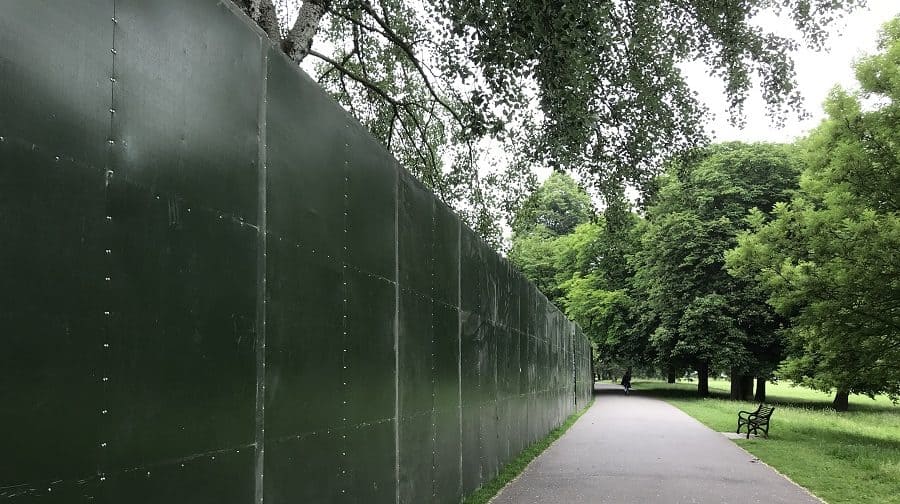 Field Day went ahead in Brockwell Park, and not all Herne Hill residents were happy about it.

A large barrier – dubbed ‘The Great Wall of Brockwell’ by campaigning group Brockwell Tranquility – was put in place before last weekend’s bank holiday, cutting off access through large areas of the park in the run up to Field Day and Mighty Hoopla festivals at the weekend.

Residents took to Twitter to share pictures of themselves out in the usually picturesque park now surrounded by hoarding, and criticise the decision to cut off the green space throughout half term.

The barrier is nearly as tall as the Brockwell Clock, it does seem taller than the fence at the event last August. Just how tall do the event organisers think locals are around here ?or do they think that there are giants lurking in Brockwell Park @BrockwellLove @EventBrockwell pic.twitter.com/nxyA34tnWF

Many were particularly irked that children on half term have limited access to the green space.

Brockwell Park is basically shut to local residents at the moment – in half term week – kids should be enjoying outdoor space not met with massive no access walls. Shame on you @lambeth_council ? pic.twitter.com/VsxUsLA51X

While others have been surprised that areas they thought would be open are actually fenced off.

again another route is closed yet shown as open on the map. This map is a waste of time @lambeth_council @BrockwellLove @EventBrockwell pic.twitter.com/IY2arNeAtK

The events come after a hard-fought but unsuccessful campaign by residents to stop Lambeth Council from granting permits and licenses to festival organisers.

On January 21, 2018, The Herne Hill Society published a letter of objection to all proposed events in Brockwell Park, saying that “The park, by virtue of its size, natural character and history, is not suited to mass events such as those proposed.

“It is a traditional metropolitan park, open to all free of charge, used in daylight hours by walkers, runners, cyclists, young and old, and, more generally, by local people seeking a tranquil space in a busy, noisy and – as we are becoming increasingly aware – polluted urban environment.

The events proposed are diametrically opposed to this essential role played by the park.”

The society, in agreement with campaigning group Brockwell Tranquility, have always maintained that they do not oppose all events, but do not believe large-scale events are suitable.

In January, Caroline Paice owner of The Parlour Cafe told the News that as her shop sits on the Southwark-Lambeth border, it was unlikely to benefit from large-scale festivals: “The Parlour is a small independent cafe and most of our customers are dog walkers, families, groups of friends and freelancers. We survive because they come to the cafe on the way to and from Brockwell – or enjoy sitting in and looking out on to the park.

“If Brockwell is filled with lorries, fenced off or damaged throughout the summer, then there is a negative impact on us as a business: people will find other parks during what should be our busiest time of year.

“I can understand some people thinking that the festivals are good for business, but we just don’t benefit from the potential buying power of festival goers either – they spend money inside the fenced off areas and generally don’t visit the independent shops.” Field Day festival will see a packed music line-up perform, including Four Tet. Festival organisers have also announced the launch of a new community fund to give back to Brockwell Park.

A spokesperson for Field Day told the News before the event:  “We are thrilled to bring Field Day to its new home in Brockwell Park this weekend and looking forward to welcoming festival goers this afternoon.

“We’ve been working with local talent, food start ups, artisan breweries to put on a very special edition this year, not to mention a huge line-up of musical talent including Tony Allen & Jeff Mills, Fever Ray, Four Tet and of course the incredible Erykah Badu.

“Teaming up with Lambeth Music Network, we’ve given local artists the opportunity to open the Main Stage today and tomorrow. A panel consisting of representatives from Lambeth Music Network and Field Day, as well as BBC 6Music and Field Day DJ Gilles Peterson, have considered submission by local musicians and we have Wu-lu, Project Karnak and Tomorrow’s Warriors Female Frontline all set to perform.

“As our new home, we are committed to supporting the future of Brockwell Park and have introduced the Field Day Community Fund. All those on the guest list will make a donation upon entry to the festival, the total sum raised will be invested into local initiatives directly maintaining and bettering Brockwell Park for local residents.”

Residents have been advised to call Lambeth Council on 020 7926 9793 or the Field Day community liaison line 020 3886 0739, which are both open 24 hours during the weekend, in case of any problems throughout the weekend.