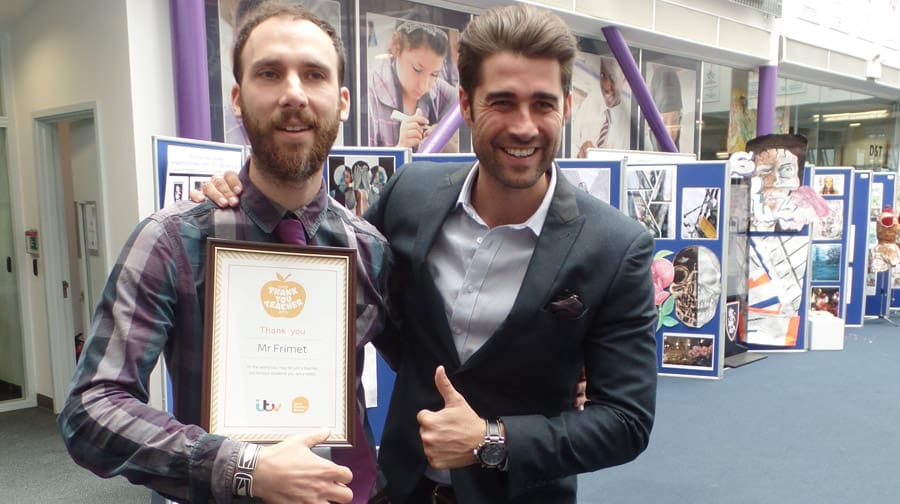 A Bermondsey art teacher was given a surprise award on national TV this week, for making a giant chicken skeleton with his pupils.

Ben was being filmed with Matt by TV crews, under the impression he was just taking them for a walk around the school. He was then led to the school atrium, where he was met by a huge cheer and a band playing. A visibly surprised Ben said: “Whoa, that’s crazy. This is not like every day.”

After being told he ‘was an inspiration’, Ben was shown video clips of students and teachers praising him and his work, with some pupils describing their teacher as ‘eccentric’, ‘bizarre’ and ‘enthusiastic’. The art teacher had been working tirelessly after school with students to create a giant chicken skeleton, which now stands in the school’s atrium.

He co-ordinated the work of art, science and English departments in the ambitious project, and a group of scientists called Chicken Coop – who research human and chicken interaction – culminating in a major Chicken Fest that took place during the summer term.

As part of the project students worked with geneticists from Oxford University who delivered a session where pupils learnt how to extract DNA from chicken bones, and later analysed the data. Ben later said: “It was very heart-warming and lovely to be given a national accolade for something I enjoy doing. “It was lovely to celebrate the students’ and Chicken Coop’s work through this achievement.”

Richard Bannister, Principal, said: “I am delighted that we were able to support Ben in this exciting cross-curricular project at the City of London Academy (Southwark). Ben really deserves the award for all the hard work in planning and working with students outside of the school day on the Chicken Fest launch.”