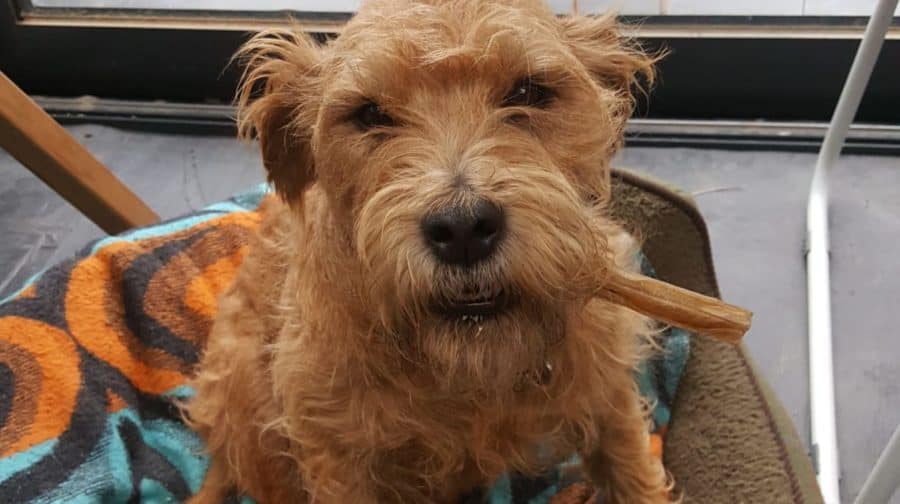 Cagney, named after the famous detective duo Cagney and Lacey, was reunited with her ex-copper parents when they launched their own investigation

Two ex-coppers used their detective skills to sniff out the man who allegedly snatched their dog from right under their noses.

Trevor Gravell left the family’s red wire haired Patterdale outside as he nipped inside the Walworth Road Argos on December 3 to buy a couple of Christmas presents for family and friends.

But as he came back he discovered to his despair that prize pooch Cagney – named for the famous detective duo, Cagney and Lacey – was nowhere to be seen. Trevor’s wife, Anna, told the News: “We just thought if this was a crime, how we would solve it?

“I drove up to the Walworth Road and I managed to get my hands on some CCTV from the local shops.

“We could see this man walking up to the Elephant and Castle from the Walworth Road, but that’s all we had.”

Not to be deterred, the pair split up family and friends to scour major areas that the mystery man might have disappeared to with Cagney, whom they got from Battersea Cats and Dogs Home.

At London Bridge, Anna said she had a sudden urge to get out of the car and check the alleyways surrounding the station.

She said: “The third alley I looked down, I saw a group of men. Something caught the corner of my eye – I called her name and I knew then that it was my dog.” Anna confronted the man, who insisted that the dog was his. But Cagney recognised her rightful owner and rushed towards Anna, leaving no doubt in her mind.

“I took control of the lead, because that was my dog!” she said.

Now after the painstaking search to be reunited with their prize pooch, the couple, who live in Herne Hill, have thanked the shop-owners who willingly handed over their CCTV to track down Cagney. They have also warned other dog owners of the need to be vigilant after their ordeal.

“It’s a warning to other people not to leave their dogs, because other people will take them,” warned Anna. “But for us it was a happy ending – even if they were the five longest hours of my life!”

The couple decided it was a waste of police time to report the incident, and were just happy to be reunited with Cagney.