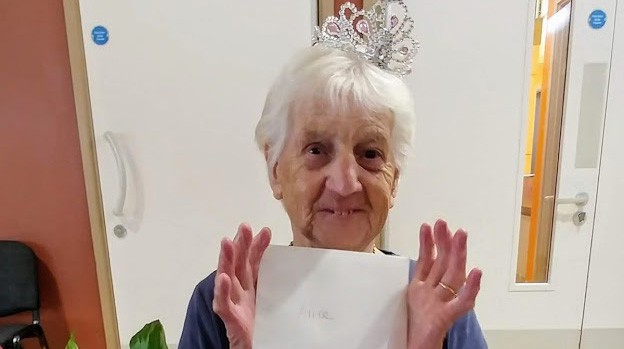 The Queen of Blackfriars Settlement

Ninety-eight-year-old Alice, the oldest Blackfriars Nightingale, will be the first to have her service live streamed from the crematorium by Albins funeral directors, as the nation isolates in fear of coronavirus.

Bermondsey born Alice Woodgates was not a victim of the pandemic, but plans for her funeral have had to be dramatically scaled down as older family members and fellow choir members from the Blackfriars Settlement self-isolate.

Up to 80 mourners were expected with a coach load of 50, most of them pensioners, are now preparing to login and watch her funeral service from a live steam being set up at Honor Oak Crematorium tomorrow (Tuesday March 24).

For sixty years the popular member of the Blackfriars Nightingale choir lived in Applegarth House on the Nelson Square Gardens estate and sang each Christmas at Borough Market and at Shakespeare’s Globe.

Her daughter-in-law Carol Woodgates called the settlement on Blackfriars Road Alice’s adopted family. “Since her husband Ernie died in 2002 she spent every Thursday, Friday and Sunday at the community centre. She loved them and enjoyed choir practise, went on countless holidays with them. She was the oldest Blackfriars Nightingale and on her birthday they always got her to wear a crown and called her the Queen of the Blackfriars Settlement.”

Spritely and active Alice only developed rather rapidly alzheimer’s two years ago and until a fall on December 16 outside a local café was doing very well. She passed away from pneumonia.  “We always thought that she would get to the 100. That is in huge part due to local people that provide excellent voluntary and support service with people with alzheimer’s,” said Carol.

So touched are Carol and Alice’s son David by the work of the Blackfriars Settlement they are asking people not to give flowers but instead to donate to the charity.

Limited to just twenty the funeral will not be followed by a wake and her family are accepting that it will not be just as they would have liked it. “To get to 98 and not have a proper send-off is not ideal, but this is the time we live in and the way Albins have accommodate us with a live streaming of the service is brilliant. Whoever has a computer can feel like they are part of the service.  In the summer we plan a proper celebration of her life with the choir at Blackfriars Settlement and her three-and-a-half your old great granddaughter singing ‘Twinkle, twinkle little star’.”

Another song close to Alice’s heart is Tom Jones ‘My my my delilah’, which will be played at her funeral. “My mother-in-law was prone to exaggeration,” Carol laughed “she went away with the Blackfriars Settlement and there was a Tom Jones look-a-like, she took to the mic and later told us all she had sang  ‘My my my delilah’ with the real Tom Jones.”

Alice had two sons and unfortunately outlived Stephen, who passed away in 2017, she has six grandchildren and her seven greatgrandchildren are all girls. Born in 1925 she lived just off the Bricklayers Arms, by Old Kent Road in Bermondsey, before moving to Waterloo with her children and husband, and then settling in Blackfriars.

Her early life was tragic, losing her mother when she was just three-and-a-half years old and father when she was just 21 during the War in 1942. At the time Alice was driving ambulance for the army. But her life was largely one of domestic bliss, her milkman   husband Ernie, who the family say was called the ‘fastest in the west’ after the well-known Benny Hill character, was everything to Alice.  The couple just missed out on celebrating the Diamond Wedding anniversary by just one year when he died from a sudden stroke. But singing became her thing after his passing and family hope that this summer her pals from Blackfriars Nightingale will all be able to come together again and raise their voices to their queen. The family welcomes everyone that knew Alice to join in the live steam. The service will take place at 1.45pm tomorrow (Tuesday March 24th) the service can be viewed between 1.40pm and 3.25pm but will be closed after that. Logon to www.obitus.com with user name honor6138 and password 954071.

The family have asked for no flowers but to donate by contact Tina Jonston at the Blackfriars Settlement via email tina.jonston@blackfriars-settlement.org.uk

Southwark NewsNewsCoronavirus: 98-year-old Blackfriars Nightingale, will be the first to have her service live streamed from the crematorium