Coronavirus: Tributes to retired Guy’s and St Thomas’ nurse from Peckham known to many as ‘Aunty V’

'A pure gentle soul with an amazing spirit' 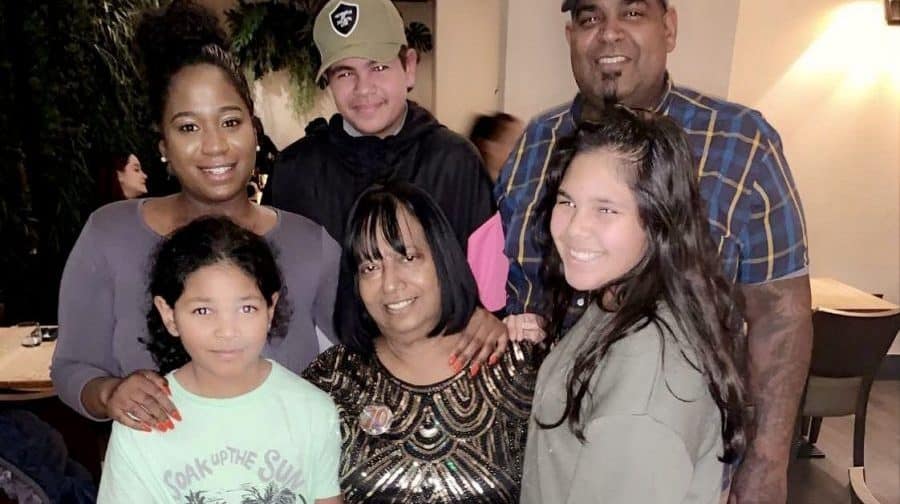 The family of a retired nurse from Peckham who died from COVID-19 have paid tribute to the ‘go-getting’ grandmother of three who dedicated 30 years to the NHS.

Veronica Joy Curnell’s family describe her as a fun and compassionate mother and grandmother who spent her life helping others.

The retired NHS nurse was 70 years-old and suffered from type 2 diabetes and hypertension – making her particularly at risk of the virus – when she fell ill in April.

She was hospitalised on the night of April 3 after deteriorating rapidly from suspected COVID-19 and pneumonia and immediately taken into intensive care.

Veronica managed to speak to her daughter, Krystal over the phone from the ward, but almost straight after was put on a ventilator. That was the last time Krystal heard her mother’s voice.

She passed away eight days later, on Easter Sunday, with her daughter by her side – just a fortnight after first falling ill.

Krystal describes her mum as a ‘go-getter’ and ‘pillar of the community’ in Peckham where she had lived for 40 years – in Pioneer Street.

Veronica worked as a nurse from the early 70s until retiring in 2005 to care full-time for Krystal’s father in his final months.

In recent years she had acted as a mentor to many young people in Southwark and also worked as a registered childminder.

“Her caring role was not just limited working in hospitals,” says Krystal.  “Often, she’d spend her time caring for and building relationships with young people of all ages, who referred to her as Aunty V.

“And due to her giving and easy-going nature, those young people became extended members of her family.

“She quickly became a pillar of the community and always had an open door policy which made even strangers feel comfortable with her.”

Veronica came to England from Jamaica in the early 60s, at the age thirteen to join her parents who had already come to the UK for work.

One of seven siblings, she and the family settled in Islington where she attended Barnsbury Secondary School for Girls until the age of sixteen.

After school, Veronica spent a year working as a nursery nurse in Kentish Town before beginning nursing training in Highgate’s Whittington Hospital in 1968.

A year later her career was put on temporary hold after she became pregnant with her first child, a son, Jason, before picking up again four years later at St Anne’s Hospital in Tottenham.  She qualified with flying colours in 1974, determined to continue as a working mum. Newly qualified Veronica in her uniform

In 1980 she moved to Peckham while working at New Cross Hospital.  She later took up a role as a day-time staff nurse at Guy’s and St Thomas’ where she worked until retirement – dedicating over 30 years to the NHS.

Outside work she was a regular bingo player and enjoyed socialising at her local community centre and helping other, vulnerable members of the community.

“Even after breaking her leg in 2014, she continued an active life, caring for others and continuing as a social butterfly.

“I know that my mum would like to thank all her family, and friends that supported her in her life.”

A funeral will be held on May 18, which the family hope to live stream.

“This is utterly heartbreaking,” said one mourner in a tribute posted on Facebook, “Your mum was someone truly wonderful. A pure gentle soul with an amazing spirit”.

Another wrote: “Such a fine woman filled with an infinite love for others who would put your needs above their own. She would share what she had but demand nothing from you.

“Most of all I had the privilege of her calling me friend, even at a distance she was and will always be in my heart with beautiful memories. V my friend, rest in peace.” Veronica in her youth

Southwark NewsNewsCoronavirus: Tributes to retired Guy’s and St Thomas’ nurse from Peckham known to many as ‘Aunty V’