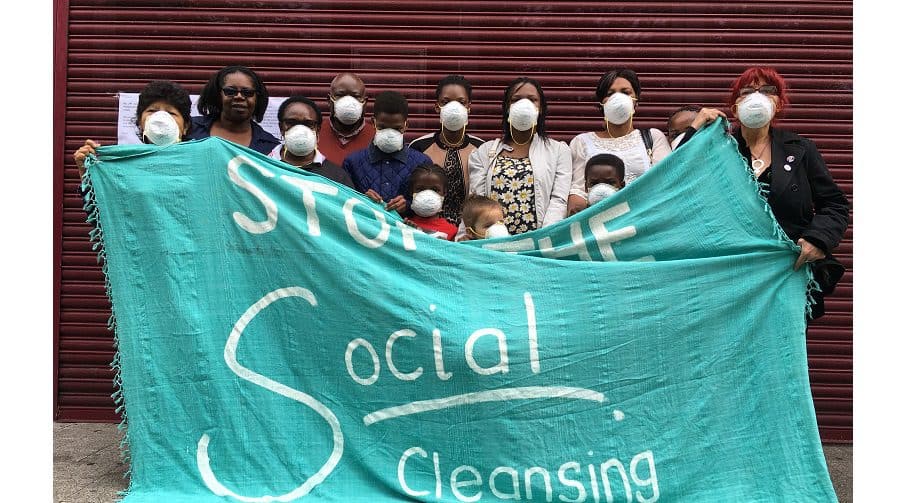 Residents protest outside hall after council bans 'Fun Day' from going ahead. Photo by Jasper Delamoth

Southwark Council have been labelled “bullies” after banning a Family Fun Day organised by residents who oppose plans to demolish the Aylesbury Estate.

The Aylesbury Estate Family Fun Day event was due to take place on Saturday in the Thurlow Lodge Community Hall. The afternoon promised a BBQ and kids’ face painting, as well as performances by singers and rappers.

But the event was pulled after a letter was received a few days before from the council, in which it said that letting the event go ahead “may lead to invasion and illegal occupation of the hall by demonstrators”.

It prompted a disheartened response by organiser, Beverley Robinson, who said: “Southwark are bullies. We were trying to organise a community focused event for people who live here, when there aren’t many that happen on this estate anymore.

“We’re trying to engage the community. It’s a community hall where people have events like this all the time, and we’re trying to save the community,” said Beverley – one of six leaseholders fighting the council’s attempts to compulsorily purchase their flats.

Southwark Council responded saying the event could not go ahead because an application for an “entertainment licence” was made too late. No further comment was made about the authority’s suggestion that an illegal occupation could have happened.

Thurlow Lodge is owned by Southwark Council, but used weekly by the Divine Rescue foodbank. Divine Rescue secured permission earlier in the year to continue using the hall, after a dispute with council. Southwark initially planned to have the foodbank leave the hall and retake vacant repossession of it, after a TRA disbanded and ended its lease on the property.

Beverley said she believed another motive the council had for cancelling the event was because charitable donations would be raised for leaseholders’ legal costs in a forthcoming inquiry about the estate’s regeneration.

Cllr Stephanie Cryan, cabinet member for housing, said: “We became aware that an event had been planned in our Thurlow Lodge community centre, which is currently used as offices by the Divine Rescue organisation only and not the organisers of the event.

“As the owners of the building we were not approached for permission to use the centre, which currently has no entertainment licence, and we raised this with the organisers, but by this time the event was only a few days away and there was not enough time to process a temporary licence.

“We have stated that we would be happy to work with the community to help arrange a future event and make sure the correct licences are in place.”

It’s worth reiterating that the ‘explanation’ about late licence came days after the menacing letter was sent.

Guys don’t waste your time protesting against this corrupt and incompetent council lead by corrupt councilors like Peter John who has a vested interest in demolishing our homes. A group of us made up of tenants and lease holders have rently had consultation with well respected human right lawyer to take Southwark Council to ECHR (European Court of Human Rights). The only way to stop the council and corrupt councilor is to take the to ECHR before the UK exit the EU. If we all come together, believe me we stand a very good chance to derail their plan to demolish our homes.