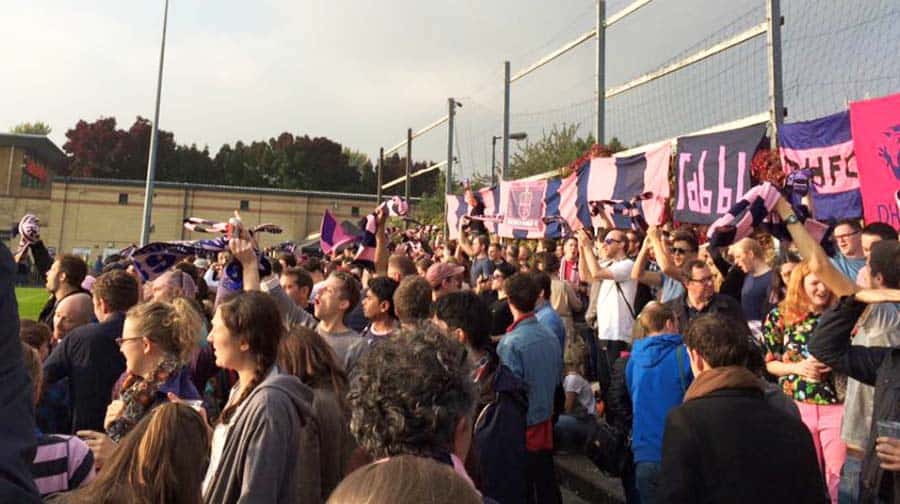 Councillors decided unanimously to push ahead with plans to acquire Dulwich Hamlet FC’s ground as the club faces eviction from its current owner.

The council agreed to explore options for securing public ownership of the Champion Hill site at a cabinet meeting on Tuesday, March 13.

It means Southwark’s director of regeneration can now negotiate to buy the site from current owner Meadow Residential LLP.

The local authority plans to build council homes on land adjoining the stadium at Edgar Kail Way, while also securing the future of the 125-year-old non-league club.

It comes after DHFC was served notice on its licence to play at the ground by Meadow Residential LLP on March 5 and also received a £121,000 bill for backdated rent.

The club is temporarily playing at Tooting and Mitcham United’s ground, which is eight miles from Dulwich.

Meadow bought the site in 2014 with the intention of regenerating the land for new homes, but their plans were rejected by the council in October for various reasons, including a lack of affordable homes.

Recommendations to approve the acquisition of the land and authorise Southwark’s director of regeneration to negotiate the purchase of the site with current owner Meadow were backed by councillors on Tuesday.

However, Meadow has repeatedly said the land is not for sale.

If Meadow refuses to negotiate a price for the site, councillors are expected to meet again to discuss using a CPO – compulsory purchase order – to forcibly buy the land.

In a report to the cabinet on Tuesday, councillor Mark Williams, Southwark’s cabinet member for regeneration and new homes, said the council had no intention of redeveloping the stadium or pitch for residential purposes.

Cllr Peter John, leader of Southwark Council, said after the meeting: “This decision is about delivering much-needed housing in Southwark and it is also about securing the future of Dulwich Hamlet Football Club which we all feel passionate about.

“The club is hugely important to the local community, with thousands coming out in support every week, and that is why the council wants to make sure that they can return to their rightful home, where they have played for the last 125 years.”

“It’s been an incredibly difficult time for the club and our fans, and to have the support of the council gives us some hope things can be resolved.”

Dulwich Hamlet supporters are expected to hold a family-friendly rally at Goose Green, East Dulwich, at 12.30pm on Saturday, March 17. They will be marching to the Champion Hill stadium.

The News contacted Meadow Residential for comment but did not receive a response by the time of going to press.