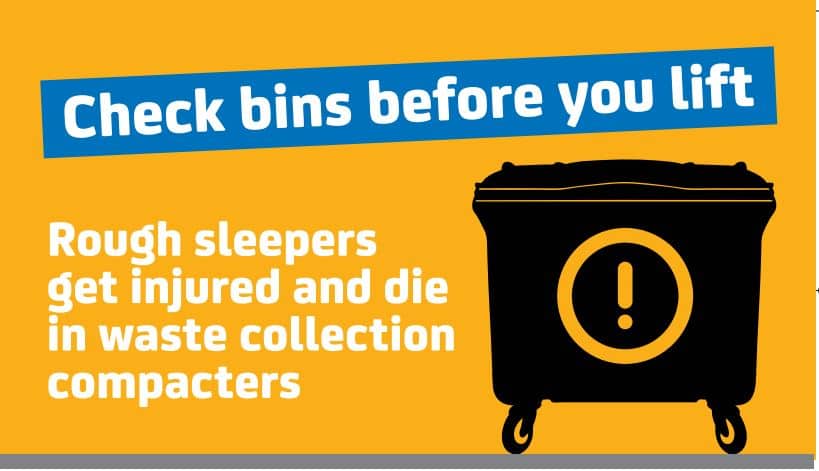 Southwark Council has issued a warning for local businesses to check their bins before they are emptied – to prevent rough sleepers sheltering inside from being crushed to death.

Eleven rough sleepers are known to have died in the UK from 2009 to 2011 after being accidentally tipped into waste collection vehicles and crushed to death.

No such deaths have yet been reported in Southwark but a council leaflet on the issue states: “Southwark has the sixth highest number of rough sleepers in London so the likelihood of occurrence is relatively high.”

Businesses most at risk are said to be those with large 660 litre capacity bins, are in areas with high numbers of rough sleepers or businesses that store ‘comfortable’ waste, such as textiles.

Having unlocked bins and being in a low footfall area also increase the risk of serious injuries or death to rough sleepers, the council’s warning said.

Between July and September 2018, 3,103 people were found sleeping rough in London, a record number, according to statistics from the Combined Homeless and Information Network (CHAIN).

As part of the awareness warning, the council has created leaflets, posters and bin stickers to remind local businesses and waste collectors to carry out checks.

The council also advised waste collectors to bang on the side of the bin to make sure no-one is inside before emptying.

In 2014, the remains of Matthew Symonds, 34, were found by staff at a waste recycling unit in Bristol.

He had been sleeping in a bin in Swindon under cardboard after it was reported he had been turned away from a homeless shelter.

If you are worried about a person who is rough sleeping, you can refer them to streetlink.org, which connects homeless people to local support services.