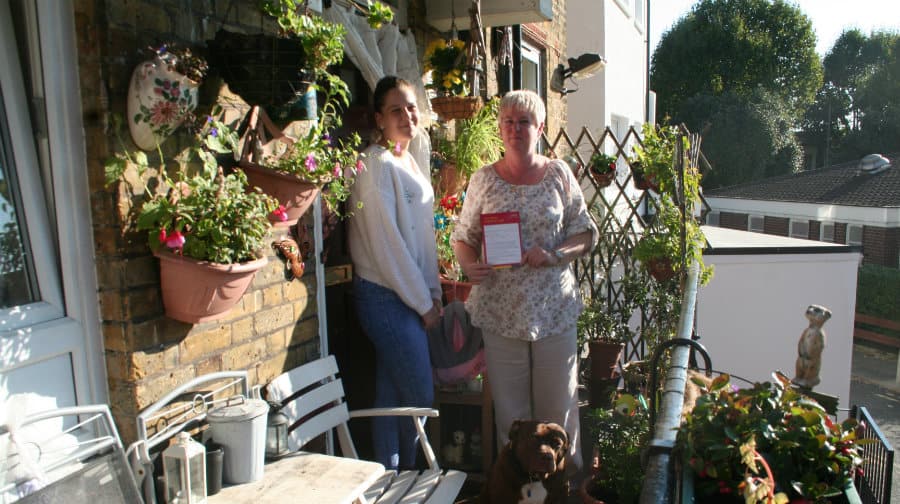 Hundreds of people have signed a petition after Southwark Council threatened to tear down yet another resident’s balcony garden.

Bermondsey mum Sarah Harris, of the Southwark Park Estate, received a warning letter from the council telling her that the colourful plants she kept outside her front door were a “health and safety danger.”

Earlier this year the News reported that Kennington gran Pat Bryan had succeeded in staring down the council when they demanded she also clear her walkway – yet it seems that the thorny issue has been raised again with a new crackdown on green-fingered residents.

Sarah said: “I’m really p****d off to put it mildly! I understand the need for fire safety standards, especially after the Lakanal fire, but this is just so unnecessary. “I’m the end property, so nobody needs to go past my flat in the event of a fire. Nobody would have any trouble getting through anyway – we got a fridge past it the other day!”

The 45-year-old has been keeping plants outside her house for 24 years and is proud of the effort she takes in “greening-up” the area. It also keeps her “from going mad”, after she was diagnosed with transverse myelitis, a spinal condition, and forced to spend a lot of time indoors.

She said: “I grew up surrounded by plants. My parents had a garden and I loved it, but obviously I don’t have a garden here, so I need to make do. “No-one else here really makes an effort. Most people are paving over their garden for parking or just not doing anything with theirs.

“The council are always going on about Southwark In Bloom and being green, but now they’re targeting one of the few people in the estate trying to do that!”

Sarah’s daughter Tania has set up a Facebook protest group called “Help My Mum Save Her Plants!!!” which has already bloomed to over 200 members.

The 25-year-old said: “She buys plants every week, it does my head in! She sees one in the shop and says ‘Oh, it’s dying.’ Most people rescue dogs, not plants!”

Sarah vowed not to give up on her “oasis.”

She said: “I am so worried that one day I’m going to come back from work and find them all gone. I just can’t understand as I’ve had them out there for so many years and now they’ve dropped off this leaflet without even knocking on the door.

“I’m not going to give up though. They did the right thing with that other woman and I hope they just see sense here too.”

Kennington resident Pat Bryan, who won the last ‘War of the Roses’ against the council, is rooting for her fellow gardener and hopes officials will also leaf her alone. She urged her to “stand your ground” and said that following her stance last spring, other residents had joined her in brightening up her estate by creating their own hanging gardens.

Southwark Council cabinet member for Housing, Cllr Richard Livingstone, said: “Of course we would be happy to work with the resident to see how she may be able to keep some of the flower pots, but we are going to have to ask her to remove a number of the items, including a rotary washing line, table and chair, to ensure the way is clear.

“While we understand that people want to add personal touches to their homes we have to balance this with our responsibility for the safety of all the residents. The tenancy agreements are clear that walkways should not be obstructed. This is both for the safety of the residents leaving the homes in an emergency and for any emergency services who need to enter the property. These are public areas and must be treated as such.”

As a bee I have to say that I’m buzzing disgusted by the council, they have created a concrete jungle & what’s a jungle without plants? An absolute buzz one, that’s what!
Sort yourselves out Southwark or I’ll sting ya in the backside!
Next you’ll stop people leaving custard out for badgers……