The council spent £6,819 on design and a further £8,581 on implementation, and included removing the full stop 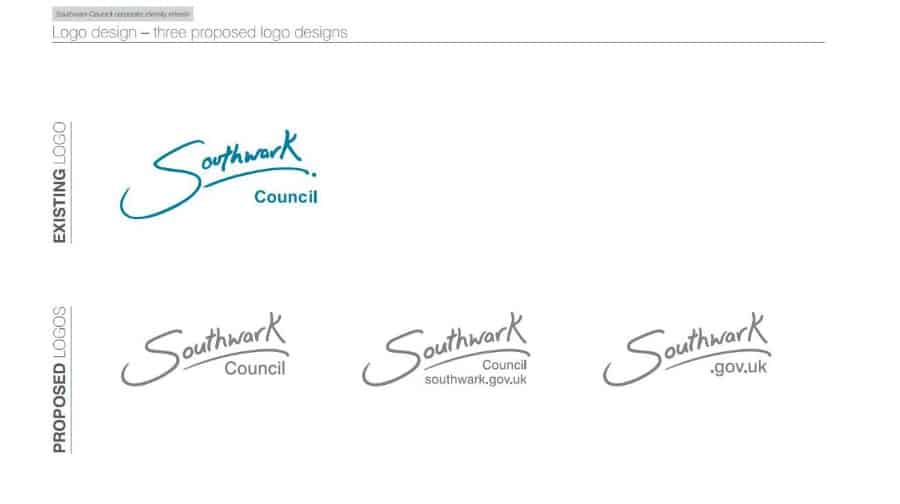 Southwark Council has defended paying £15,400 in 2014 for a redesign of their logo, which included removing the full stop, amid criticism that they did so while making cuts to youth services.

Figures revealed in a freedom of information request by SE1 showed the council spent £6,819 on design and a further £8,581 on implementation. But council leader Peter John has said the rebrand is actually saving the council money.

Part of the ‘Branding Refresh’ report said: “The logo has been redrawn to improve its quality, reduce the size of the ‘S’ and make it more legible, with the aim of being more sustainable and appropriate for digital use, as well as being more compact and requiring less space around it.

“The full stop has been removed.  It is proposed that for all items except letterheads, the logo drops the use of the word council and replaces this with gov.uk instead, reflecting our commitment to digital by default.”

“And yet they seem to always be able to find money for their pet projects or for introducing new payments for Labour councillors. These really are not the priorities for local residents.”

But Southwark Council has justified the expense, saying that it is necessary to “invest to save”, and pointed out that under the Liberal Democrat’s time in power, some “£42,238 was spent on rebranding refreshes”.

Councillor Peter John, Leader of Southwark Council, said: “We have saved £156m over the last five years by making efficiency savings and doing more with less, and we have managed to continue protecting services, keeping council tax low and delivering on our manifesto commitments, such as free swimming and gyms.

“Sometimes you have to invest to save particularly when trying to move services online and this piece of work is part of that. The new designs are already saving staff time and money and will help us to provide more information online, which is what our residents want.

“We are absolutely committed to delivering value for money and it is completely wrong to suggest otherwise.”

What was wrong with the old one? Because there’s no URL under it? It shouldn’t cost £15,400 to put a URL under something.

As a graphic designer myself, I’d estimate the cost of designer time changes to be around £120, including factoring in some common sense back-and-forth discussion time. I’m guessing the rest is bureaucracy, back handers to socially and politically important friends involved in the design agency and endless meetings full of people who want to feel important to be heard more than they know what they’re talking about. Design by ignorant, self-important committees costs the taxpayer far more money than the work itself ever would. If this was their own money, I bet they’d balk at £120.

It’s easy to dismiss this as expensive, especially in austerity times. I’ve shared a few thoughts on this below but the TL:DR is: We don’t know what steps went into deciding to redraw the logo or what the council got for in the implementation stage.

With less cost I can make this more interesting if you endorsed to do it again. I am an Ethiopian, in Addis Ababa, Ethiopian.