Of the 605 new homes, 283 will be available at social-rent, the council has said 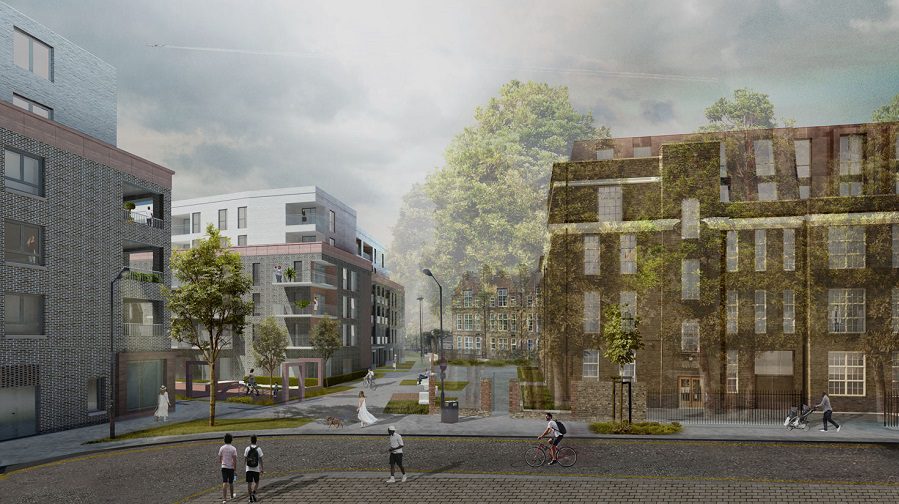 Children’s services offices and green space in Peckham will be the first of ten across the borough to be transformed into new housing schemes.

Since 2014, Southwark Council has been identifying plots of land it owns in Peckham, Old Kent Road, Camberwell and East Dulwich. The ten locations could be transformed into a total of 605 new homes, 283 of them council homes.

The Flaxyard site between Peckham High Street, Sumner Road and Melon Road became the first of these sites to be waved through by Southwark’s planning committee, at a meeting on Tuesday.

The two grassy plots and offices in Sumner House (making the first two of then ten locations) will be turned into four blocks with a total of 164 flats and four townhouses, including business space on the ground floors and a small car park next to Melon Road.

A handful of locals took to the council’s website to object to the plans.

One resident said: “The open land, is an area in which children on the community can run and play.

“Any limitation of the opportunity to play outdoors will only worsen the obesity epidemic which is currently evident in children in inner city areas such as Peckham. Of further concern is the internal layout of the residences. The playgrounds and the classrooms of the school will be directly overlooked. The children should be free to play and learn without risk of voyeurism.”

Architects Levitt Bernstein estimate the construction for Flaxyard will be worth £42m, with building completed in 2019.

The decision on Flaxyard was taken after a separate meeting of Southwark’s cabinet member on March 21, in which it was decided that the ten plots of land should all be formally re-designate as land to build homes.

Some of the ten plots (including Sumner House children’s services centre) are already in use by businesses and other groups, which will be moved out before construction to take place. However, the council’s plans state that these will be compensated.

In a report published ahead of the March 21 Cabinet meeting, the council said it will be “in the public interest” to override the rights of the businesses affected in these sites. “It is considered that the public interest in building new homes, a large proportion of which will be affordable and 283 of which will be council homes at social rents, outweighs the interference with private rights,” the report said.

The council will subsidise the provision of cheap-rent council homes with £11.5m given to its development partners across the ten schemes.

The eight other plots

The other nine plots of land that Southwark Council hopes to develop and build new homes are listed below. The locations with asterisks have already received planning applications.

Plans approved for erection of 67 flats of one, two and three bedrooms, within a four-to-eight-storey block.

Plans approved for removal of Peckham Arch to build two buildings that are four and six storeys tall, with nineteen flats

Awaiting permission for a part-three-four-and-five-storey block with 23 homes and 214.1sqm of ground floor retail space.

As part of the proposals for Angel Oak Academy, it was suggested that the Wickway Centre could be relocated to a new building beside the school, and that homes could take its place in St George’s Way

Draft plans presented have suggested that Corbett, Finley Court, and Carey Court blocks will be demolished and rebuilt, with new homes.

The council has suggested that sheltered accommodation for the elderly could be built.