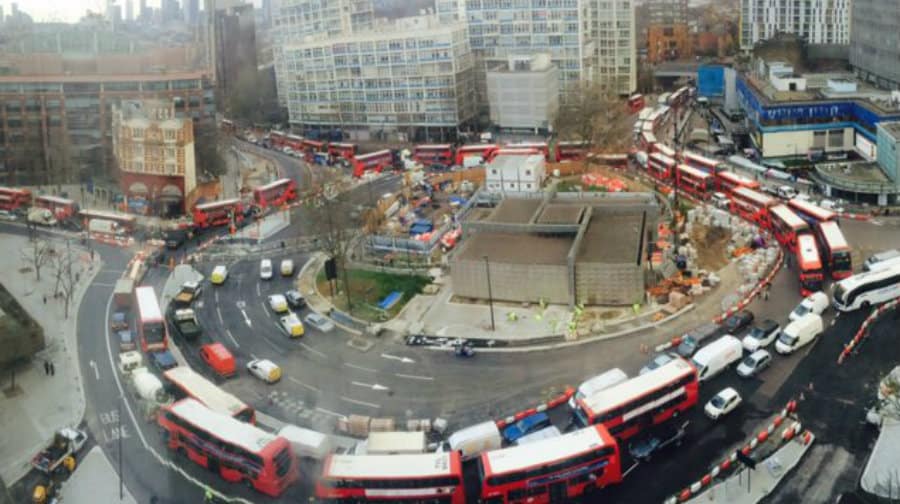 The leader of Southwark Council has remained defiant that ripping out the Elephant and Castle roundabout was the right thing to do, despite being forewarned about the delays to traffic the new layout would cause.

The new two-way layout at the junction caused traffic “hell” for commuters this week, with drivers being warned to add another hour to their journeys.

As the 28 buses which pass through the Elephant piled up, one commuter described seeing passengers abandoning them “as though escaping a disaster.” Commuter, Letty Fox, said she saw an ambulance trying to get through the gridlock.

“I wouldn’t want to urgently need an ambulance round that ways at the moment,” she posted on Facebook.

A civic square at Elephant and Castle has been the vision of Southwark Council for more than ten years, informed by their masterplan for the whole area. But Transport for London were not initially in favour and, in fact, threatened to block the plans over fears the new layout would interfere with traffic flow.

In data released by TfL in 2013, they estimated the new peninsula would make motorist’s journeys seventeen percent longer and pedestrian’s journeys would be ten percent longer. Long-time campaigner for the roundabout, Richard Reynolds, whose home in Perronet House overlooks the junction, called the new set up “absolutely insane.”

“TfL said they didn’t want to get rid of the roundabout because the effect would be more congestion, but Southwark wanted more of a place for people to linger and now this is what we’ve got. “I’m absolutely baffled,” he said. Richard and his neighbours have watched the “absolutely gripping” scenes of chaos unfold from their windows, but the father-of-two said it was a “nerve-wracking” experience to try to cross the junction.

“There’s so much dangerous behaviour. I was nearly run down this morning by a bus driver because they thought they were fine to go,” he said.

Southwark Council Leader, Peter John, said following the lengthy delays at the junction this week he had asked the Deputy Mayor for Transport for an urgent update, but defiantly stood by the peninsula plans as the right thing to improve safety at the notorious intersection.

“The changes to the road layout in Elephant and Castle were specifically designed to make the area a safer place to live, work and play. The new layout is intended to be pedestrian and cycle friendly, not dominated only by vehicles,” he said.

“As people adjust to the changes, we expect to see an improvement in the traffic flow. This scheme was extensively consulted on and supported by local people, particularly as this junction has previously seen the highest number of collisions in London.”