35% Campaign point to drastic losses of council homes on Heygate and Wood Dene, and call for re-think on Aylesbury Estate demolition 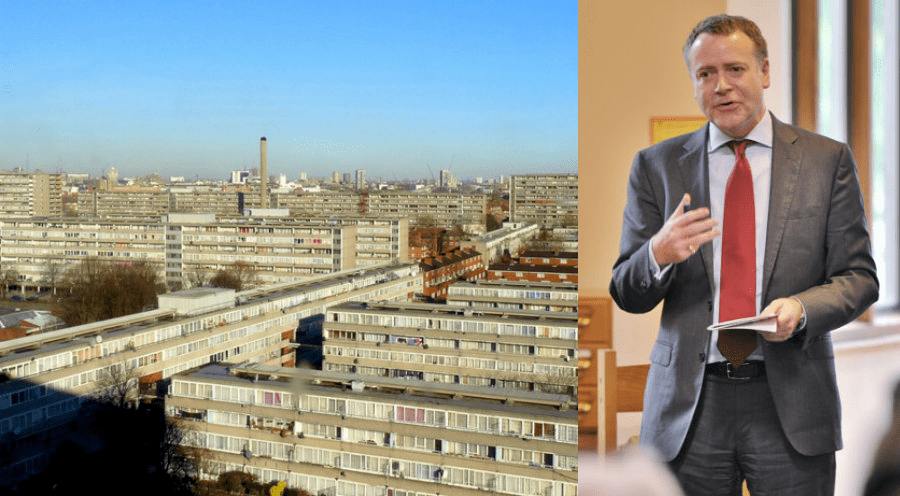 Peter John and the Aylesbury Estate

Southwark Council leader Peter John has been criticised for remarks about his local party’s approach to regenerating council estates, made in response to Jeremy Corbyn’s party conference speech.

Last week, Cllr John was one of a few senior figures in Labour-run London councils who issued direct responses to Corbyn’s speech on September 27.

Corbyn told his audience in Brighton he believed too many council regeneration schemes amounted to “forced gentrification and social cleansing”.

On Friday, a statement from Cllr John published on Southwark Labour’s website, said: “Jeremy also set out the need for ballots for any new estate regeneration and re-provision of existing council homes…

“It is already our policy in Southwark to only consider any new estate regeneration if it leads to an increase in the amount of council homes on the site.”

Jerry Flynn of the 35% Campaign

Jerry Flynn of the 35% Campaign today told the News that Cllr John’s comments were “not true”. Jerry offered the Aylesbury, Wood Dene, and Heygate estates as examples where regeneration will mean drastic reductions in council housing.

Planning documents show the Wood Dene estate, which held 323 social-rent homes before it was demolished in 2006 (when the Liberal Democrats controlled the council), will be replaced by an estate with 54 social-rent flats and 63 shared-ownership flats. 216 are to be sold privately by new landlord Notting Hill.

At the Aylesbury, planning documents from 2015 show there will be a net loss of over 700 social-rent homes. Overall, the 2,700-home estate will be replaced with 3,600 homes. 37.5 per cent of those will be available at social rent, 12.5 per cent will be shared-ownership and shared-equity, and the other 50 per cent will be sold by Notting Hill.

The Heygate Estate (once 1,194 homes) has been demolished, and developer Lend Lease is in the process of building 2,500 homes – 550 of which will be on “affordable rents”.

Councillor Mark Williams, cabinet member for regeneration and new homes, today told the News that the policy Cllr John referred to – that new estate regeneration projects must increase numbers of council homes – was agreed “two years ago”, suggesting Cllr John’s comments should not be taken with regard to council housing shortfalls on the three estates.

Jerry, a former Heygate estate tenant, said: “If this is a serious change of heart, then we welcome it. The best test of that would be to halt the Aylesbury Estate regeneration.

“But I think the reason Peter John feels comfortable saying this is that there are no more big regeneration projects in the pipeline, besides those that already have planning permission.

“I think Peter John wanted to react to Jeremy Corbyn’s speech with answer like ‘well we’re doing all of this already’. But that’s just not true.”

He said Southwark and other Labour-run London councils should “fall in line” with Corbyn’s pledges: namely that residents should be offered a ballot on plans to regenerate their estates.

Heygate estate residents were denied a ballot on regeneration in 2003 by the then Liberal Democrat-run council. A ballot was also held at the Aylesbury Estate in 2001, whilst Labour had control, in which residents gave a resounding “no” to proposals for the estate to be sold to Horizon housing group.

“Increasing the number of social rented homes is a key priority for Southwark Labour and we have begun our programme to build 11,000 new council homes by 2043. This is despite the government attacking social housing, and making it difficult for councils to build and retain council homes: the Lib Dem-Tory coalition [government] slashed the grants for new affordable homes and increased the discount for Right to Buy which has led to more council homes being lost.

“Labour nationally has set out ambitious plans to build new homes and new council homes and tackle land-banking developers, meanwhile the Tories are doing nothing to increase housing supply.”