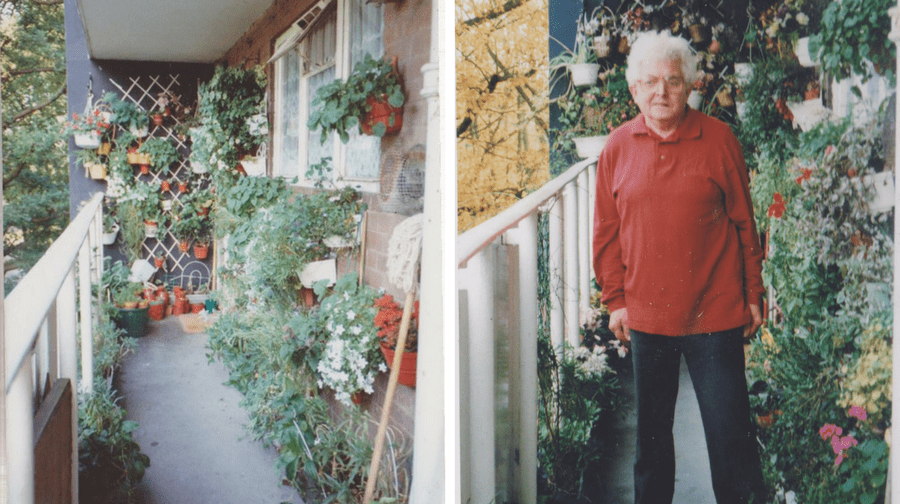 Margaret Lafferty with her beloved plants on her balcony

A Southwark in Bloom winner’s beloved plants were removed from her balcony the day after her funeral without her family’s consent, her daughter says.

Margaret Lafferty’s vibrant balcony at Countisbury House, in Sydenham, was decked out in hanging baskets and potted plants before she died of cancer.

The plants were the 84-year-old’s pride and joy and she asked her family to donate them to St Christopher’s Hospice, where she passed away on July 20.

But the day after her funeral, a neighbour contacted Mrs Lafferty’s daughter Marion, 50, to tell her the plants had been removed and a truck was waiting to take them away.

“While she was in hospital, a note was put through her door saying they [the council] were going to remove the plants by a certain date,” said Marion, who lives in Dulwich.

“They said they needed to be moved because of a fire hazard, but she was in a flat on the end, so nobody goes past her to get out anyway.

“There was another letter put through the door before the funeral but we hadn’t been there to see it and then the day after the funeral my mum’s neighbour rang me and said her plants had been ripped down off the wall and there was a truck waiting to take them away.”

Marion, a civil servant, said she managed to get to the flat in time to save the flowers – but she has since complained to the council’s housing department.

“She lived there for 31 years,” she said. “Her kids and grandchildren bought her some of those as presents because they knew she loved the plants.

“She won Southwark in Bloom once and there are two rose bushes at the entrance to the estate which she campaigned for and picked out.

“She also planted into communal grounds on the estate.”

Marion described her mother, who had three children, five grandchildren, and a great-granddaughter, as “the kindest person you’d ever meet”.

“She was very kind, always helping everybody and she knitted for the world right up until she went into hospital,” she said. “She was a wonderful grandmother.”

Cllr Stephanie Cryan, Deputy Leader and Cabinet Member for Housing, said: “We are very sorry for any distress caused to Mrs Lafferty over this matter.

“Obviously after Grenfell, fire safety is the top priority for the council and our tenants.

“The council has been extra rigorous in ensuring that anything that could hinder the fire brigade or residents making their escape in the event of a fire is removed.

“I’m pleased to hear that this matter was resolved, but again I apologise if we caused additional upset for Mrs Lafferty at an already difficult time.”