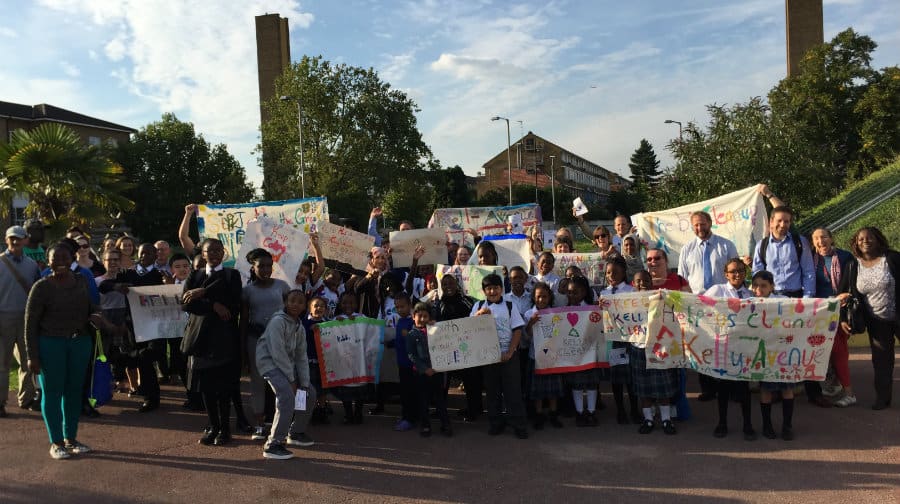 The council has swung into action after 120 people piled into a crime-ridden park to campaign for it to be made safer.

Primary school children told their teachers that they had found weapons in Kelly Avenue Park in Peckham and reported hearing of other young people being shot and killed for their bikes, friends being encouraged to join gangs, bullying and one sexual assault.

After a crowd of children, parents, school teachers and church leaders descended on what is formally known as Central Venture Park, Southwark Council has committed to making the space feel safer for everyone. “I want to make sure everyone who uses it feels safe,” said Cllr Barrie Hargrove, Southwark’s cabinet member for parks and leisure and a Peckham ward councillor.

Cllr Hargrove told the News he intended to push for funds to be allocated to keeping the space clean and safe after he was invited to meet the campaigners earlier this month.

“It’s tremendous,” he said of the efforts of Peckham Citizens, a local group set up to help residents make the changes they want to see in their area themselves.

“I can’t wave a magic wand and make money right now,” said Cllr Hargrove. “We’re looking very carefully at every penny we spend and have to think very carefully before we commit to anything, but that park is a priority for me and as a ward councillor I will be making the case for investment.”

Head teachers from nearby schools Oliver Goldsmith and St James the Great got behind the campaign after their pupils said they were too afraid to go to the park. “It is our children’s right to have a safe park to play in and as a school we would like to work with others in our local community to make sure that happens,” said Anita Asumadu, Head teacher at Oliver Goldsmith Primary School.
Denis O’Regan, Head teacher at St James the Great Primary School, agreed and said the adults had decided to take the park back for the children.

“As adults – parents, teachers and the local community – we have decided that we must have the courage to do what is necessary to keep them safe. It’s time we took back Kelly Avenue Park and made sure it is a clean and safe place for all children in Peckham to play,” he said.

The campaigners, led by Peckham Citizens, will meet with Cllr Hargrove again in a month to discuss the possibility of establishing a Friends of Kelly Park group.