Southwark’s council wards to change from May local election 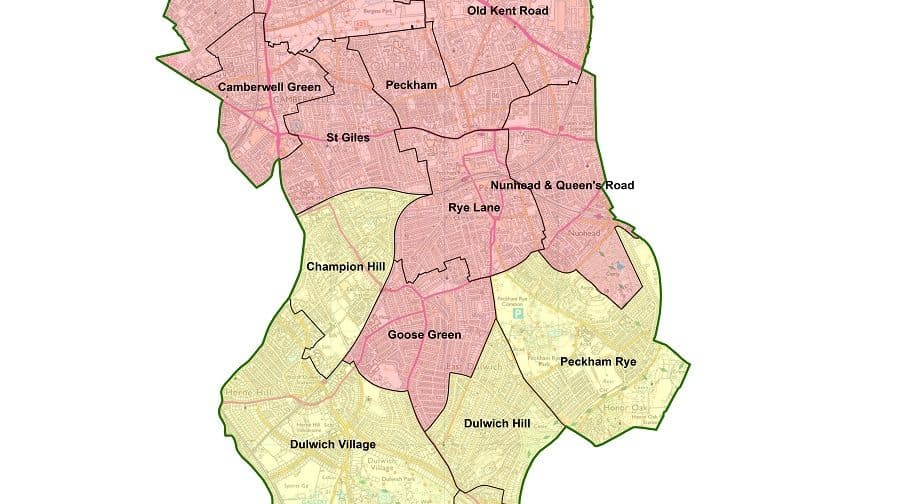 A map of Southwark's ward boundary changes which come into effect on May 3, 2018 (Credit: Local Government Boundary Commission for England)

Residents are being reminded that every electoral ward boundary is set to change in some way at the next local election in May.

Some wards will have a new name, others may have a different number of councillors, and many voters may find they have to go to a different polling station this year.

This is because the Local Government Boundary Commission for England (LGBCE) – an independent body – has reviewed Southwark’s boundaries as there have been changes in population meaning that some areas have too many councillors and others too few.

The changes will come into effect at the next full council election on May 3 and voters can expect to receive details on their polling card.

Under the new boundaries, there will now be 23 wards rather than 21 – but the number of councillors will stay the same at 63.

Some wards will keep their usual name – but others will have a new name, such as Old Kent Road and St Giles. A map of Southwark’s ward boundary changes which come into effect on May 3, 2018. The wards in yellow will be represented by two councillors and the pink wards by three (Credit: Local Government Boundary Commission for England)

The final recommendation for the changes came after the Commission held an eight-week public consultation on its draft proposals.

The recommendations were passed by Parliament and will come into effect at the next council election on Thursday, May 3, 2018.

“Across the borough, we have sought to balance the views expressed to us by local people with the criteria we must apply when we are deciding on new electoral arrangements,” Professor Colin Mellors, chair of the LGBCE, said when he announced the final recommendation in July 2016.

“As such, we believe these recommendations deliver electoral equality for voters as well as reflecting the identities of communities in Southwark.”

Residents are urged to register to vote if they haven’t already – although you won’t have to register again just because your ward has changed.

More details on the boundary review can be found on the LGBCE’s website: https://www.lgbce.org.uk/current-reviews/greater-london/southwark

A map of the new wards can be found here:

Southwark NewsNewsSouthwark’s council wards to change from May local election