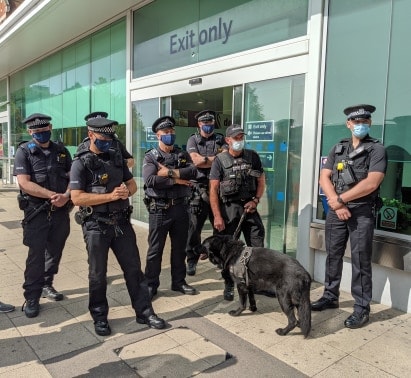 Over 900 people have been arrested by British Transport Police’s county lines task force in just one year.

The team, which is focused on catching gangs who use the railway network to transport drugs between London and regional towns, arrested 934 people between December 2019 and 2020.

To date they have secured fifteen modern slavery charges, using new legislation to target those who groom vulnerable children as drug mules.

Often, the children are lured in with promises of money and status, but are then threatened with violence to make sure they do not leave.

The children, usually in their mid-teens, can be sent across the country with thousands in cash and class A drugs.

The youngest person arrested by the team was a thirteen-year-old boy found in Kent last September, carrying £1,500 in cash. The discovery led to a dawn raid at a flat in south east London, and the arrest and charge of two people for modern slavery offences.

Since December 2019, officers have seized £308,000 from individual stops, made 471 drug seizures and removed 168 dangerous weapons from the railway.

Detective Superintendent Gareth Williams said: “One year on we have a very strong picture of how county lines gangs are using the railway. We know where they are operating and the young age groups they target.

“This year, we’ve used the Home Office funding to bring in experts in child exploitation from notable charities committed to tackling county lines, and we have expanded the team to make sure we can reach across England, Wales and Scotland, putting pressure on gangs wherever they operate.

“We are also in step with the wider railway industry, training their frontline staff to identify the signs of county lines and child exploitation.

“They are our eyes and ears and we use their reports to identify where we should target next.”