Sacha and Simon say their accommodation needs to ideally be in south London, and closer to St George’s Hospital in Wandsworth, where doctors are concerned about the pregnancy. 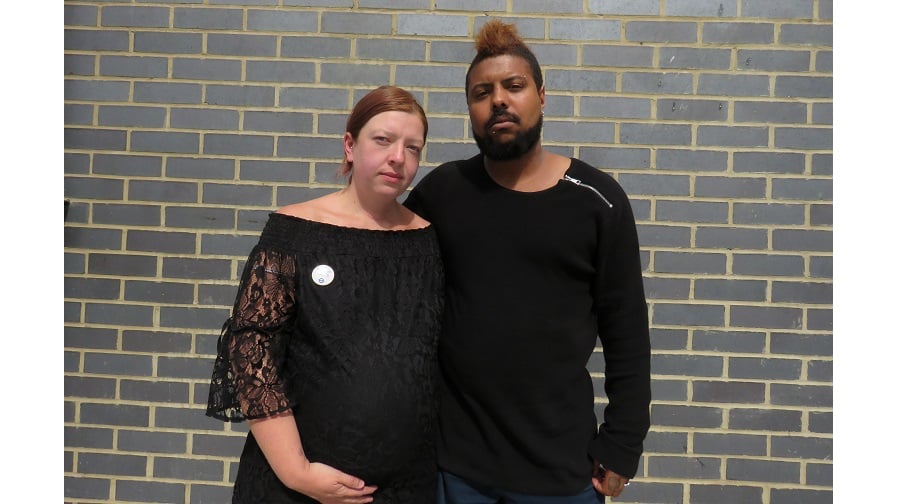 An expectant couple are desperately looking for a new home in Southwark, after finding blood stains on the walls of a temporary room they were given in Greenwich.

Sacha Carroll, who is seven-months pregnant, and boyfriend Simon Buffong were offered a “tiny” place in Plumstead by Southwark Council in July, after they registered as homeless.

Doctors have also told Sacha and Simon their baby could be born with disabilities, due to problems with the development of its spine.

The couple are now desperate to be given a permanent council tenancy in Southwark, while they instead sit at the bottom of the council’s waiting list.

“We asked the council for help in early June,” said Sacha, 28. “Then they rang us up and said they had found us a place in Plumstead. We just went with it.”

On Tuesday (July 25) – after the News had contacted Southwark Council – the couple were then offered another temporary accommodation in Poplar, east London, which they have also had to refuse.

But they were still reeling from their experience in Plumstead, where Sacha and Simon found “blood stains on the skirting boards, the radiators, and on the mattress”.

“And they had told us it was going to be a new bed. A neighbour told us there had actually been a stabbing in our room, and they had come out of their room and witnessed it,” She said. “The house they have put us in is a three-bed house that’s been turned into a six bedroom. The room is tiny.”

Sacha and Simon say their accommodation needs to ideally be in south London, and closer to St George’s Hospital in Wandsworth, where doctors are concerned about the pregnancy.

Their unborn baby has been diagnosed with Spina Bifida, described as a spinal defect which means the backbones in the spinal cord have not properly connected, and that the gap between them is filled with excess fluid.

Surgery will be needed to correct the defect within 24 hours of birth, due on September 22. And doctors have warned there is a risk the baby be left unable to walk as it grows older.

Sacha said: “The doctors are saying we could need a lot of extra support in the future, like equipment. We have told the council this, but they are just ignoring us.”

She has also been in and out of hospital, having had recent surgery on her thyroids.

Stephanie Cryan, Southwark’s cabinet member for housing, said: “I am genuinely sorry that we can’t offer this family assistance to find a permanent home more quickly, but with such a high demand on our housing service and around 1,700 families currently in temporary accommodation, we are unable to find them anything permanent in the very near future. However, the condition of their temporary accommodation was of immediate concern and the family has now accepted an alternative flat today. I hope that a permanent solution can be found soon, and I wish them the very best for the future.”

The couple had lived in Hampshire for three months until May this year, when Simon needed to leave his job in construction. Having been a council tenant “all her life”, Sacha hoped they would be able to return and find accommodation, but have had to register as homeless in early June.