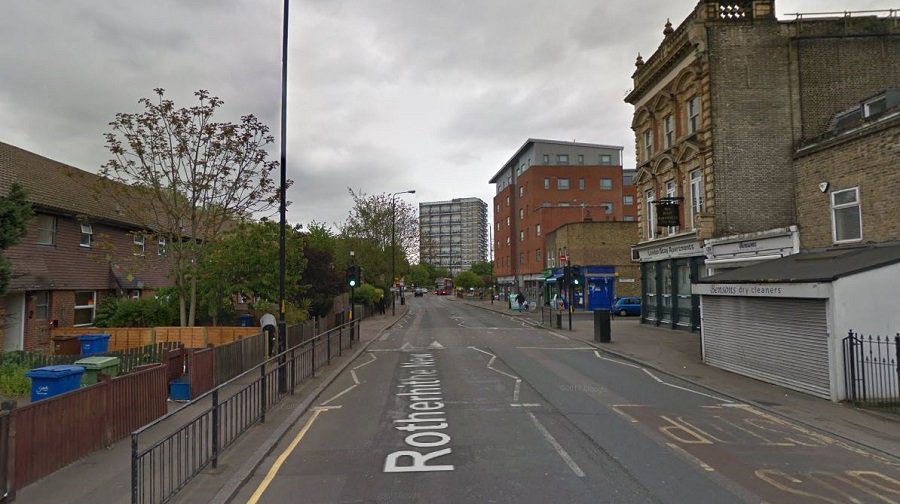 An eyewitness has told of the terrifying moment a motorist mounted a kerb, narrowly missing a baby in a pushchair, and crashed into a building before running off as the car burst into flames.

The man, who did not wish to be named, watched on in horror as a couple dragged the baby to safety just in time as the car careered towards them on Rotherhithe New Road.

It has since emerged that police had tried to stop the car just minutes earlier in Bestwood Street, Lewisham.

Speaking to the News, the eyewitness, who is a father himself, said he did not know how “the kid didn’t get killed”.

“I saw the car coming towards me and I thought he was police to be honest, but without the lights, and all of a sudden he just did a left up on the kerb,” he said.

“The mum and dad jumped for safety with the buggy and the car burst into flames straight away.

“The geezer got out the motor and legged it down the road.

“There was one geezer in the car but when he got out and legged it all of a sudden there were two.

“That’s a terrible thing to do; if you’ve done whatever you’ve done just take responsibility – you don’t put a baby and its parents in jeopardy.”

A Metropolitan Police spokesperson told the News the vehicle was not being pursued by officers at the time it crashed.

“At about 12.50pm on Tuesday, June 26, we attempted to stop the car in Bestwood Street, Lewisham,” said the spokesperson.

“A short while later it was in collision with a building in Rotherhithe New Road at about 12.54pm.

“The driver fled the scene.

“There have been no arrests. Inquiries are ongoing.

“The vehicle was not being pursued.”

A London Ambulance Service spokesperson added: “We were called at 12.50pm on June 26 to Rotherhithe New Road, SE16, to reports of a road traffic collision.

“We sent a single responder in a car and an ambulance crew to the scene but we did not take anyone to hospital.”

Anyone with information can contact Metropolitan Police by calling 101 or online at www.met.police.uk/ro/report