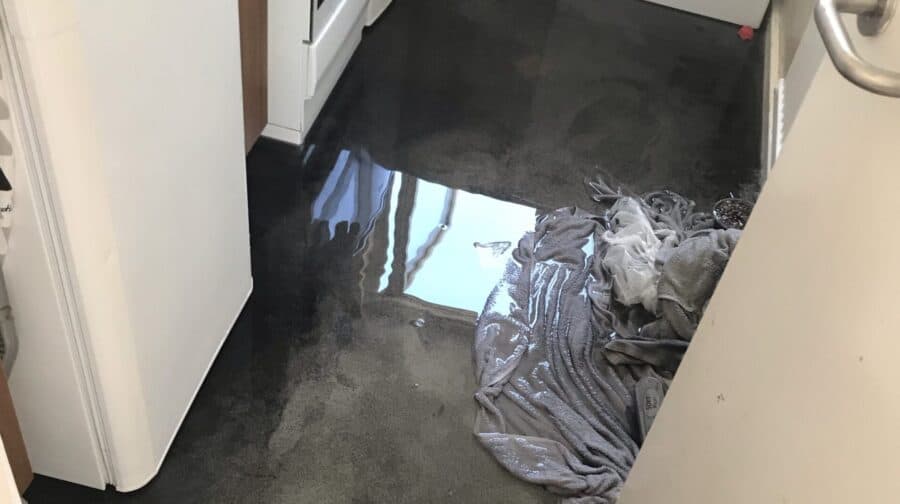 One resident shared the scale of the leak in her flat

A couple’s first day of married life was “ruined” after a radiator burst in their flat on a council estate, ruining keepsakes from their wedding.

New husband Daniel Solomon was enjoying his first day of married life with his wife in their flat on Woolstaplers Way in Bermondsey on Monday when suddenly the radiator burst.

The leak caused water to run through the flat for an hour until the communal water supply was turned off, sadly ruining flowers from the wedding the previous day, and shoes which had been worn to the wedding.

The couple called the Fire Brigade in a bid to get the water turned off, and enlisted the help of an emergency plumber – which landed them with a hefty bill of more than £600. A block of flats in Woolstaplers Way was affected

“At around 11:30 the kitchen radiator split and black, gunky water began spewing out,” he said.

“It came out under huge pressure, spraying the walls, ceiling, ruining flooring and carpet, and destroying my new wife’s wedding shoes and some wedding mementos.

“We were bailing out a bucket of water every 30 seconds for over an hour.

Mr Solomon claims a firefighter told him that the council had been working on the pipes, which caused a huge pressure spike in the radiators.

Southwark Council were contacted for comment, but did not reply before going to press.

“My new wife was in tears the whole evening,” he said.

“She woke up this morning and started crying again; she had wanted to press some of the pink roses we had taken back as keepsakes, but they had to be chucked as they were covered in gunk.”

Now the couple are demanding an apology from the council for “ruining” their first day of married life, reimbursement for the emergency plumber, and an apology for the “rudeness” of one council staff member who visited the flat after the leak.

Another resident on the estate who was affected, Lindsey, slammed the council for what she called a “lack of compassion” in dealing with the leak.

“The council didn’t call it in as a priority,” she said. “The radiator burst around twelve o’clock, I called the council but they didn’t turn up until three o’clock.

“They weren’t bothered about what happened at all. I’ve got two kids, and it’s a good thing it wasn’t hot water, otherwise it would’ve burned them.

“It was like a whole pool, it was trying to spread out into the living room, I’ve had to use all my hand towels to mop it up.”