COVID-19 vaccination drive: Figures show Peckham and Camberwell has one of the lowest vaccination rates in the country

'If you are in one of the priority groups and haven’t yet had your vaccine, please do come forward and get booked in' 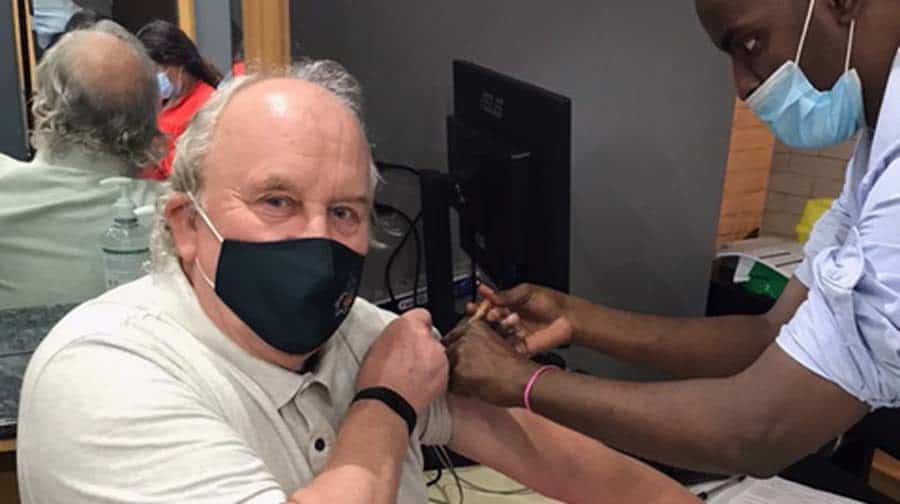 Cllr Charlie Smith, one of the first Southwark politicians to receive a COVID-19 jab. He has encouraged other eligible people to book their vaccines.

Camberwell and Peckham has one of the worst COVID-19 vaccine uptake rates in the country, with under 70 per cent of over 65s having their jabs.

The constituency is one of the ten in London to have the lowest coverage in the country.

In most key measures, Southwark borough’s vaccination rate is also lagging behind south-east London as a whole.

Although more than 537,000 vaccinations have been administered to date, there are clear gaps emerging – including within the highest risk groups.

According to data accurate up to March 11, shared with Southwark Council’s health and wellbeing board, just 77.6 per cent of over 80s had been vaccinated in Southwark, the second lowest in south-east London. The figures for over 75s and 70s are also below 80 per cent.

Only 66.7 per cent of those classed ‘clinically extremely vulnerable’ – of any age group – have received jabs, while only 70.9 per cent of over 65s have been inoculated.

Most worryingly, uptake among registered kinship carers is very low, at just 39.8 per cent, as is take-up by care home staff.

Currently, less than half the borough’s care home staff have had a jab.

The latest data also paints a picture of great disparity between the most deprived and wealthier areas of the borough, and attitudes to the vaccinations forming along ethnic lines.

Uptake among the 65-59 age group is highest in Dulwich Village at 90 per cent and lowest in Peckham at just 60 per cent.

In Southwark, around 85 per cent of white patients classed as a high priority for first jabs have taken up the offer, a figure recorded at just 56 per cent among the black Caribbean population.

Not only have there been reported issues with supply and resources to administer vaccinations but, as the News has reported, certain groups including younger people and those black and south Asian ethnic minority backgrounds are more likely to be ‘vaccine hesitant’.

Although much of this is attributed to fake news and vaccine hoax material, including false claims it can cause infertility or contains meat products, some hesitancy is the result of mistrust in the authorities and a healthcare system riddled with inequalities. There is also distrust of large drug companies, some of which have a particularly chequered history in the African continent.

Add into the mix Southwark’s often transient population, large numbers of non-English speakers and the number of people not registered with a GP and it becomes clear local health officials have a huge task ahead.

It is also a sad truth that many of those in older age groups who are from BAME backgrounds and are less likely to accept their offer for a jab are also most at risk, both due to being overrepresented in frontline roles and also the likelihood of living in multigenerational households.

Camberwell and Peckham MP Harriet Harman is among those furious that Southwark was not invited to apply for a £23 million pot of funding to help encourage people to have their jabs.

Despite fulfilling all the criteria of a borough at high risk, it did not make the shortlist of preselected local authorities and despite lobbying from Harman and her Labour colleagues no answer as to why has been forthcoming from the government.

“What is clear is that there is a real problem and we are lagging behind,” she told the News. “This threatens to deepen health inequalities and widen the health divide in Southwark and it’s very important to address it.”

Early this year Sadiq Khan claimed London was not receiving its fair share of vaccine supplies and, last month, we reported that housebound patients in Southwark desperate for vaccines – many of whom rely on carers – were still waiting for their first jabs, including those in their 80s.

When asked whether the issue is purely hesitancy due to lack of confidence in the vaccine, or due to difficulty rolling out the programme due to supply shortages or lack of staff and volunteers, Harman said:  “There needs to be proper resources and a whole range of measures to address this.

“Peer to peer messaging is important, and we need a higher level of vaccine accessibility in Southwark.

“What has been particularly galling is that Southwark hasn’t been allowed to apply for funding to help the vaccine take-up. The council is being blocked from doing that.” She said more community pharmacies administering jabs and more staff working on the vaccine drive would all help.

Southwark Council is ploughing huge resources into the vaccination drive, including setting up a network of 66 and counting community health ambassadors – with particular interest from people based in Peckham and Nunhead – tasked with reaching out to their networks and people from similar backgrounds to help dispel vaccine myths and answer questions and concerns.  They are also sharing information in multiple languages and working with Southwark Clinical Commissioning Group on a series of pop-up vaccination events.

There have also been a series of continuing public meetings giving residents the opportunity to put their questions to public health officials and doctors, and a helpline is being set up that people can call to talk through their concerns and get answers to their questions.

A spokesperson said: “The work we are doing collectively is having an impact. More than 80,000 people in Southwark have been vaccinated, over 90% of older people care home residents have been vaccinated, and Southwark saw one of the highest increases in vaccine take-up (up by 17.9%) in London between February and March. But we still have a long way to go, and we are working relentlessly to support our communities to make the right decision for them and their loved ones.”

In one ray of light, although the vaccine rollout is proving as difficult as feared, Southwark does now have the distinction of having the second lowest COVID-19 incidence rates in London, with figures decreasing by half each week.

A spokesperson for South East London CCG acknowledged the lower take-up in some parts of the borough, but added: “In Southwark, eight in 10 people aged 70 and over have had their first dose of the vaccine thanks to the hard work of our staff and volunteers across the borough.

“While there has been strong take up locally of the jab, we’re working with Southwark Council and partners to reach out to all parts of society, understand any concerns that may cause someone to not want the jab, and work to ensure they get their lifesaving vaccination. If you are in one of the priority groups and haven’t yet had your vaccine, please do come forward and get booked in.”

READ MORE – Editors’ View: Low vaccine uptake in Southwark was predictable but doesn’t have to be the case

READ MORE: Why are housebound OAPs still not vaccinated?

Southwark NewsNewsCOVID-19 vaccination drive: Figures show Peckham and Camberwell has one of the lowest vaccination rates in the country