To meet Lily, who had been able to tell me about what happened to me during those first few weeks in ICU has been brilliant, Covid survivor Mike Salmon said 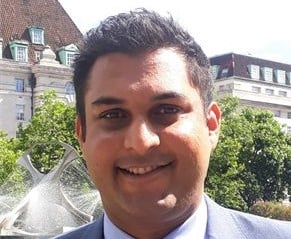 Ashish Patel, who is running the trial

A Guy’s Hospital nurse and the man she treated for Covid last year have been reunited after he joined a trial that could reverse the long-lasting damage the virus caused to his lungs.

Mike Salmon spent three months as a patient at Guy’s and St Thomas’s after catching Covid-19 in late March 2020. Five weeks of those were spent on a ventilator. Vascular research nurse Lily Benton treated him when she moved to intensive care (ICU) as huge numbers of hospital patients built up.

Speaking of his memory of being ill in hospital and then meeting Lily, Mike said: “I don’t remember anything after I had been told I had Covid-19. It was a couple of days before I was put on a ventilator from what I’ve been told afterwards. I was clearly very seriously ill. After five weeks in ICU I spent another seven weeks in hospital and I am extremely grateful to everyone at Guy’s and St Thomas’ for their excellent care and support.

“There must have been scores of people who looked after me in ICU, but to meet Lily, who had been able to tell me about what happened to me during those first few weeks in ICU has been brilliant.”

Looking back at how they first met Lily said: “I first cared for Mike shortly after being re-deployed to one of the ICUs, and he was extremely poorly. In the first few weeks of the pandemic many of us had a fear of the unknown – a lot of our patients were very ill, and we were dealing with a disease that particularly at first we didn’t know a lot about. It was pretty tough but our teams dealt with it so well.

“In those early weeks seeing Mike make progress was a seminal moment for me. Seeing him begin to get better after a few very tough weeks gave me the strength to carry on.”

Mike was among the estimated two percent of people who are left with fibrotic lung scarring after having coronavirus. This can make it hard for him to breathe.

Guy’s Hospital is running the world’s first human cell therapy trial, called MONACO, in an effort to reverse the scarring. Mike is among the first five patients to take part in the trial.

He added: “Taking part in this study, while it may or may not help in improving my breathing, is my way of helping and thanking the teams at Guy’s and St Thomas’ who saved my life, so that they can develop new treatment for patients just like me.”

Lily has returned to her normal job as a research nurse. She and Mike met again when he was referred to participate in the MONACO trial.

“Spotting Mike’s name on the screening log for the MONACO study was really special – seeing a patient that I looked after in ICU, out of ICU, and living their life has been amazing,” she said. “And it’s a real privilege to look after Mike on the MONACO trial where we hope that the cell treatment will help reverse some of the lung scarring that he sustained as a result of Covid-19.”

The MONACO study is the world’s first Phase 1 trial that has got to the stage where it has been given to patients. People are given specially-engineered white blood cells that researchers hope will eat excess scar tissue in the lungs of Covid-19 survivors. The study is being led by surgeon Ashish Patel.

Mr Patel said: “Successful delivery of this experimental cell therapy into patients marks an important milestone in establishing its safety, before it is considered for treating larger numbers of patients who are affected by post Covid-19 fibrotic lung disease.

“I would like to extend my gratitude to the five incredible patients who have come through their severe Covid-19 illness and been so willing to participate in this first in human study. We could not have done this without their support.”