CPZ extended in Bermondsey after council says there were no objections 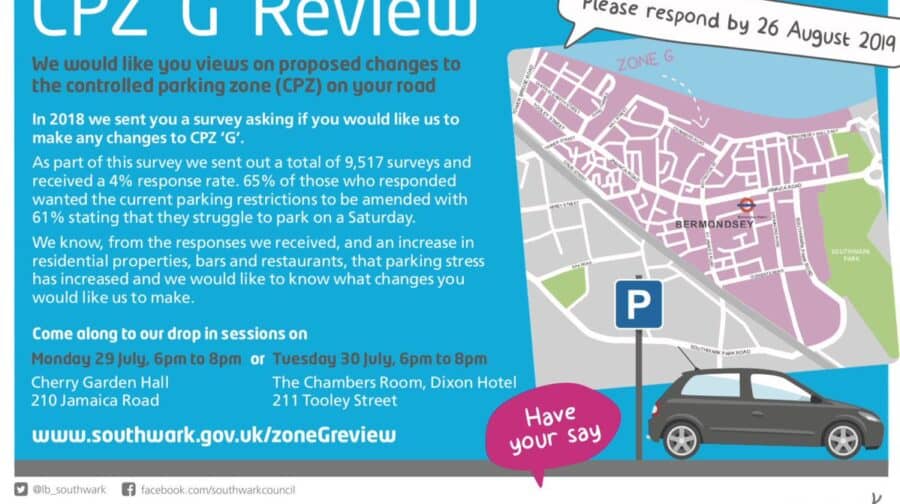 Advert for a consultation into CPZ G

Extended operating hours for a controlled parking zone in the heart of Bermondsey have been approved by the council.

The so-called ‘CPZ G’ covers the area between the river and the railway line running parallel with Jamaica Road, including parts of the Four Squares and Kirby Estates.

Currently parking restrictions are in force from Monday to Friday, 8.30 to 6.30. But now the hours will be extended to 11pm every day of the week.

The move is due to come into force on October 19.

One resident of the Four Squares estate, which is covered by the area, slammed the change, saying he felt as if residents had not been properly consulted.

“The council have got to put it to the people,” he said. “They say, ‘there was a vote taken’, well when was the vote taken?

“Was there just ten people instead of asking the people that live around here? My grandkids won’t be able to come down without having to pay to park.”

A letter sent to residents by Southwark Council admits that “no representations were received” on a consultation in May into the extension of the hours of the CPZ.

However, officials say that earlier consultations had shown a majority support for amended hours, and a consultation in 2019 showed that the extended hours were the most popular choice.

“As we received no objections to the changes, we are now in a position to commence with the installation of the parking zone,” states the letter.

Anyone wishing to park in the area from October 19 from 8.30am to 11pm will need to buy a parking permit, the letter adds.

A permit costs £125 for twelve months.

‘Have your say’ ‘consultation’ 🙂 🙂 🙂 As if Southwark council would ever listen to the people of the borough. Yet another way of squeezing every penny possible out of drivers and residents. People vote for these lowlife scumbags so get what they deserve

I am going to take them to task on this. Consulting in the middle of a pandemic. The posters on lamps when we were told to stay home, people were justifiably stressed and then they have the gall to say they asked the people. Just be honest and admit you are looking for more money rather than lie. The Housing Ombudsman will be hearing from me for sure and I suggest anyone not properly consulted get in touch with Southwark, Councillors and MP’s and finally the Ombudsman.

Great! All for it, especially with the change to weekends too.

I had both the consultation letters, it asked for your preference on changes to parking times and days, there were several different options including no change. I completed my consultations and returned them. In 2018 65% of respondents wanted the current restrictions amended and in 2019 the most popular choice was Monday to Sunday, 8.30am to 11pm. I was happy with the result. I have no choice but to pay for a parking permit, it would be nice to be able to park my car near home when it’s loaded down with shopping at the weekend instead of driving around to find a space that isn’t taken by a day trippers car that’s gone to a local tourist attraction. Shame the council have delayed it!