Crowdfunder to take Delancey to court over Elephant and Castle regeneration raises more than £5,000 in three days

'If we lose the case, we will have to pay the other side's costs. If we win, we will be able to pay our own lawyers," says campaigner Jerry Flynn 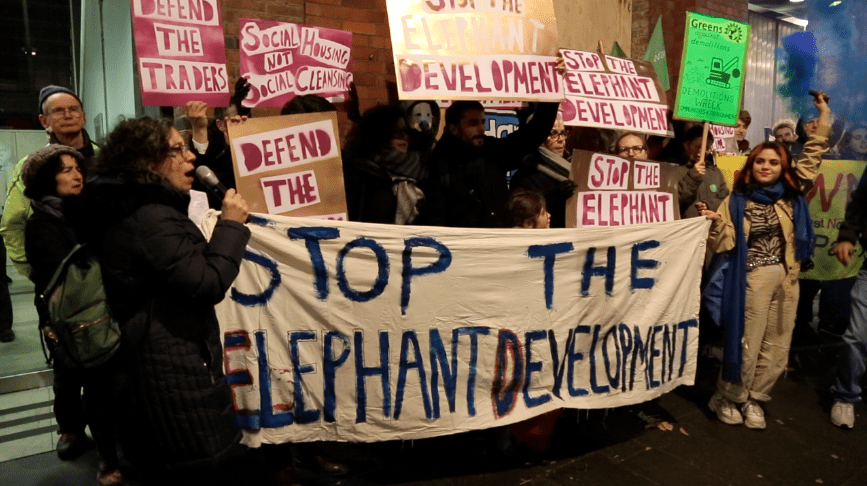 Up the Elephant campaigners

A crowdfunder to help Elephant and Castle campaigners take developer Delancey to court has raised more than £5,000 in just three days.

After smashing their initial target, the group has decided to aim for £10,000.

On Thursday, Jerry Flynn, from the 35 per cent campaign which pushes for more genuinely affordable and social housing, said: “Thanks to our supporters’ generosity we have reached our initial target of £5,000.

“However, we will have additional costs, such as court fees, so we have increased our target to £10,000, to make sure these can be covered.

“All funds raised will go towards the legal costs of the case. If we lose the case, we will have to pay the other side’s costs. If we win, we will be able to pay our own lawyers.”

A coalition of groups including the 35% campaign, Latin Elephant and Southwark Defend Council Housing, are opposed to Delancey’s regeneration plans due to what they say is an unacceptably low number of homes at social rent and a poor deal for traders.

Campaigners hope they can overturn the decision in the planning court, arguing that Delancey has deliberately misled the council over the amount of social housing that could be provided.

They say with extra funding from the Mayor’s office, Delancey should be able to add an extra 42 homes at social rent to the 116 already earmarked.

Delancey has said more delays will only cause more uncertainty for traders.

Southwark Council deliberated iterations of Delancey’s scheme over two years before it was finally given the go-ahead in 2018, with London Mayor Sadiq Khan also giving his assent.

The scheme involves nearly 1,000 new homes, including 116 at social rent, on land currently without housing.

Southwark NewsNewsCrowdfunder to take Delancey to court over Elephant and Castle regeneration raises more than £5,000 in three days