Campaigners hope that if the council is defeated, it will help establish a new 'right to a community' legal precedent 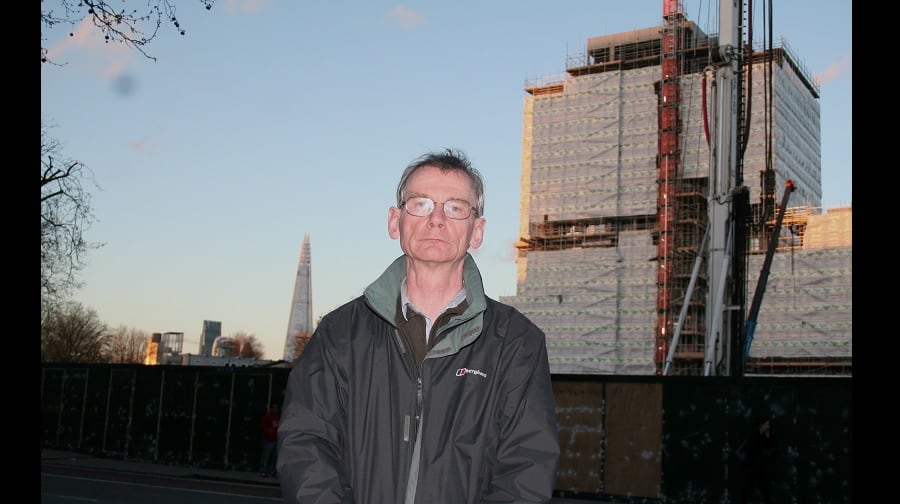 Jerry Flynn of the 35% Campaign, stood near the site of the former Heygate Estate

Local housing campaigners are crowdfunding for a barrister to represent Aylesbury Estate leaseholders who could be forced out of their homes.

Southwark Council last week batted away criticisms of its decision to pursue a judicial review of the government’s decision to block its CPO (compulsory purchase order) of eight leaseholders’ flats.

The eight leaseholders had been offered prices of below £300,000 for their flats, which the government said would contravene their human rights by forcing them to leave the area.

But the council has said they are being given market value, and offering them more would be a poor use of taxpayers’ money, and would require money from its budget for council estate maintenance.

This week, the 35% Campaign launched a GoFundMe crowdfunding page for people to raise money for leaseholders’ legal representation during the judicial review.

Jerry Flynn of the campaign, and a previous Heygate Estate resident, told the News: “Southwark have made a bad choice challenging the CPO decision. They should accept it, start treating the leaseholders properly and give them fair compensation.

“We are supporting the leaseholders because like tenants and everyone else on the estate, they are being treated badly. They are being pushed off the estate and their homes demolished to make way for new homes most simply cannot afford. We’re fantastically pleased with the response to our appeal so far and have raised £750 in just two days.

“This is a fight for everyone who wants a real chance of a decent home in Southwark and we welcome all donations, no matter how small.

“Southwark should also use the secretary of state’s decision as an opportunity to have a complete rethink about the Aylesbury regeneration and to halt the demolition. The regeneration as it stands will lose us 2,200 council flats and the affordable housing being built in its place are too expensive for most people in Southwark.”

Last week Southwark Council’s cabinet member for regeneration and new homes, Mark Williams, said the council would spend £50,000 on legal fees to fight its case in the judicial review, which may not be decided until April. He clarified that the CPO was its preferred option for emptying the western section of the Aylesbury, before handing it over to Notting Hill Housing Association for demolition by 2018, rather than negotiate with leaseholders on the value of their flats.

The council has said it has also made other options available to the leaseholders. They include: the opportunity to become Notting Hill tenants in flats built nearby; to trade the value of their flat for an equity share in a new flat, while paying service charges; to entering a ‘non-binding arbitration process’ over property price disputes; to go to a Lands Tribunal.