'It is always a pleasure to welcome Richard into school, and he is a great role model' 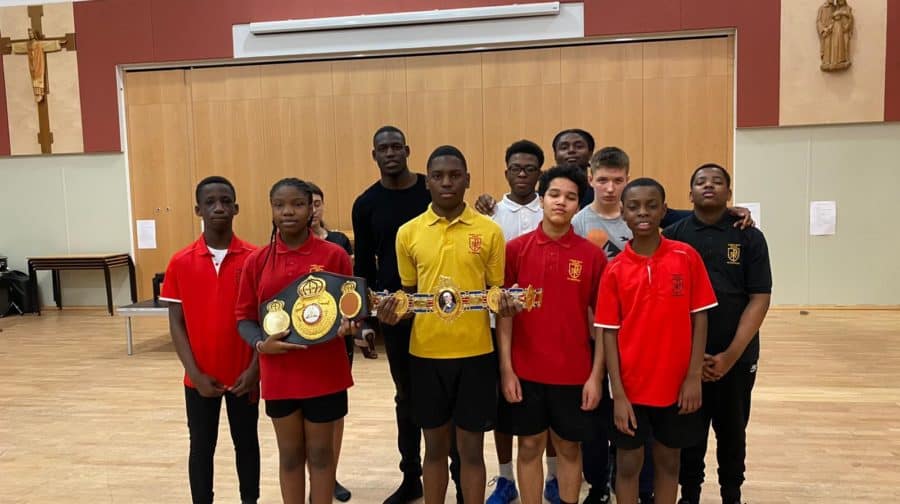 Riakporhe, who grew up on Aylesbury Estate, was crowned British champion in December and was awarded the Lonsdale belt as has been tradition for the last 111 years.  He first boxed at Lynn ABC on Wells Way as a youngster and made his professional debut in 2018.

The 30-year-old is currently in recovery after fracturing his metacarpal, but is intending to be back in the ring this summer.   At the school he met pupils from Mr Udebhulu’s class and also brought along his WBA intercontinental belt.

Since turning professional, Riakporhe has used his profile to travel to schools across the south-east warning kids away from knife crime and gangs.

It’s a personal cause as he nearly died at fifteen when he was stabbed in the chest.  After deciding to change his life and make his parents proud, he went to Kingston University to study marketing communications and advising, and continued to box.

Assistant head teacher Luke Williams said: “It is always a pleasure to welcome Richard into school, and he is a great role model.

“Having undergone some tricky times during his teenage years he now regularly speaks in schools about the importance of staying on the right path in life and is passionate about guiding the youth of today in the right direction.

“We wish him all the best as he continues to pursue his dream of eventually becoming world champion.”