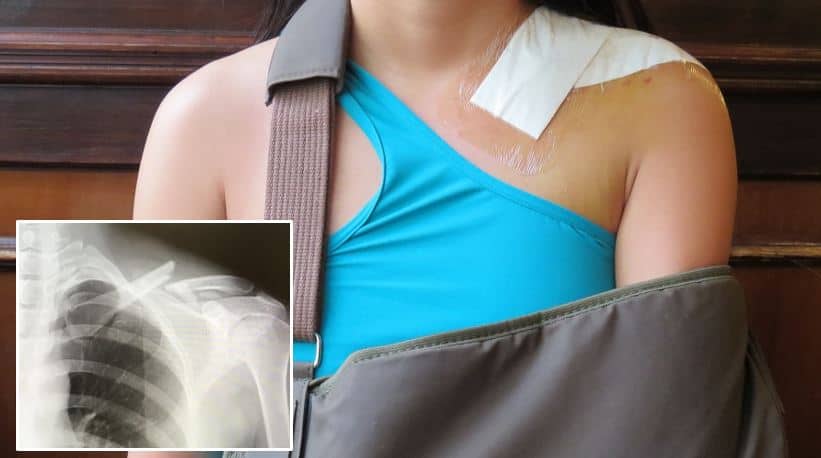 A cyclist has been left with her collarbone broken in four places and too afraid to walk past a Rotherhithe woodland after being mugged in broad daylight.

The 31-year-old woman, who did not want to be named, was targeted by two youths while cycling through Russia Dock Woodland at about 3pm on October 25.

The pair pushed the bank worker off her bike while she was still cycling and left her lying on the ground as they stole her brand new Brompton and the entire contents of its basket.

The woman had to have surgery to piece her collarbone back together and also suffered a fractured elbow which has left her unable to work – or even tie her own shoelaces.

Last week, the News reported how scared residents had called a crisis meeting with police, and had even discussed setting up vigilante groups.

Speaking exclusively to the News, the 31-year-old said she no longer had the confidence to cycle or run to work and that she was considering moving out of the area she had called home for eighteen months.

“I remember it was a beautiful day; it was sunny and warm and I think it was half term,” she recalled.

“When I cycled through Russia Dock Woodland I remember seeing two teenagers cycling very close to me.

“The guy in front said ‘get off your bike’ and I was actually quite confused so I just said ‘no’ and carried on cycling and then he just pushed me off.”

The victim of the mugging has been left with a six-inch scar after having surgery to piece her collarbone back together.

The woman said the grey Brompton M3L bike was worth £1,000 and the contents of the basket, which included her iPhone, house keys, purse and clothes, was also worth at least £1,000.

She also had to cancel a holiday for her boyfriend’s birthday and could be left with permanent numbness in her left shoulder.

“On the Saturday I was meant to fly to Prague with my boyfriend for his birthday,” she said.

“I paid for everything but I couldn’t go because they wouldn’t let me fly with a broken collarbone and I didn’t get any of the £3,000 back.

“I had to have surgery so I’ll be left with a six-inch scar and I’ve been told that the numbness in my shoulder will probably never go away and there’s a possibility the full range of strength and mobility will not return.

“I have screws and bolts in my body and if I get any irritation in future I will have to go through the surgery again and during that process they will likely have to break my bones again to take it out.

“I’m in a lot of pain and I sometimes have trouble sleeping and keep replaying what happened in my head and thinking is there something I could have done to help myself.”

The victim urged anyone with information to get in touch with police.

She described the suspects as two black males, aged about sixteen or seventeen, with local accents.

A Metropolitan Police spokesperson said: “Detectives in Southwark are appealing for information following the robbery of a woman on Archangel Street, Rotherhithe.

“At 3.10pm on October 25 police were called to reports of a robbery. Officers attended and spoke to the victim, a 31-year-old woman who had been pushed off her bike.

“Two men took her bike containing a canvas bag with her personal belongings.

“London’s Ambulance Service attended and took the woman to a central London hospital where she was treated for a broken collar bone and fractured elbow.

“Anyone with information can contact police by calling 101, by anonymously calling Crimestoppers on 0800 555 111, or by tweeting @MetCC.”

Same old story, day after day.
It’s about time we stopped these cunts, police are powerless.

Ridiculous how our society has fallen to a point that youngsters are doing this. Something seriously needs to be done about this. I think vigilantism is the only real answer now. I have no faith in the system, the police are under funded and over worked and the liberal justice system is far too soft on punishment.

I’d be happy fight back with kindness and raise money to get this person back on her bike. Is she open to that? I’m a member of the London Brompton club and we can help I’m sure!