Organised by Bike Life TV, the so-called #BikeStormz, encouraged bike enthusiasts to gather in large numbers and cycle through the streets of London 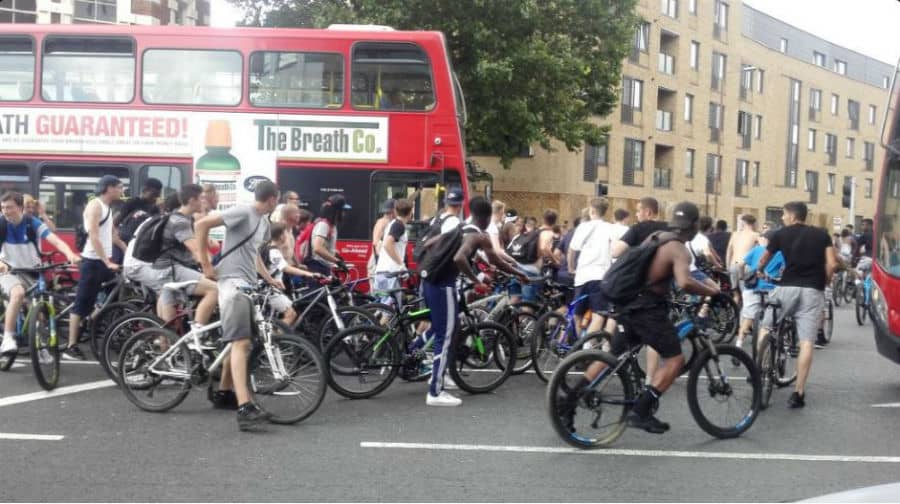 More than a thousand cyclists swarmed through Bermondsey on Saturday, obstructing roads and heading in the direction of the Houses of Parliament.

Organised by Bike Life TV, the so-called #BikeStormz, encouraged bike enthusiasts to gather in large numbers and cycle through the streets of London.

Eva Charrington, 51, an eye-witness who has been cycling for twenty years, said: “I think the cyclists themselves don’t think about what’s happening. I think people are OK with it when it happens but it is just extremely dangerous.

“People were cycling along in swarms and one came up behind me and told me to get out of the way. They started going the wrong way up main roads. It’s ridiculous really. The police had to be called for everyone’s safety. It was anarchy.

Hundreds of people on bikes just rode down Embankment in London! pic.twitter.com/sGtRjABrlq

“I called the police later on to say what I saw. I think it gives cyclists a bad name. Later on two thousand came bombing through Bermondsey. I know they were just little kids having fun but after these incidents I think cyclists have to be licensed.

“Something has to be done. I actually think the parents don’t know what they are up to. They were all quite young. I am sure their parents would like to know what they’re up to. I think it’s just a case of them being young and not knowing.”

Transport for London tweeted on the day that the ‘”cyclist demo” was heading along Tooley Street and Jamaica Road in the afternoon.

A TfL spokesperson said that police had told them around 1,200 cyclists were taking part in the event, with a few even going into the Blackwall Tunnel briefly.

The police were contacted for more information but a spokesperson said none was available.

Are we so blind to the daily gridlock, chaos, and carnage caused by cars, HGVs and other vehicles on our roads that we refer to these kids having fun as “havoc”? How crazy. Sadiq Khan should shut the city to motor traffic one weekend every month (like the Mayor of Paris does) and we can all get out on foot, roller-blade, scooter and bicycle and enjoy ourselves like these kids.

Fun? Causing even more problems for people trying to get about? No, this is about taking over.

Fun? Do you think it was fun for the people on foot who were sworn at aggressively when they tried to cross the road? Look at other news reports. These are aggressive little thugs, and pretty typical of what we all come across when we are trying to make our way around London.

I saw many positive comments from pedestrians on social media. The newspapers seem to have latched onto one or two “Disgusted of Tunbridge Wells” types who have exaggerated and made up stories of shop lifting and anti-social behaviour that the police have denied.

One person claimed to have been sworn at. She also made up some other stories which were later disproved. I’m sorry if I don’t consider her reliable as police reports were positive, as were other accounts by passers-by on social media. If you are looking for aggression in London, drivers cause the most actual violence and destruction. This is factually backed up, with statistics, and police reports on accidents leading to killing or serious injury. Excuse me if I take these anecdotal reports from “Disgusted of Tunbridge Wells” with a pinch of salt.

This is the problem these days. There is so much misinfo on all sides.