D-Day marked the beginning of the Allied forces Normandy campaign 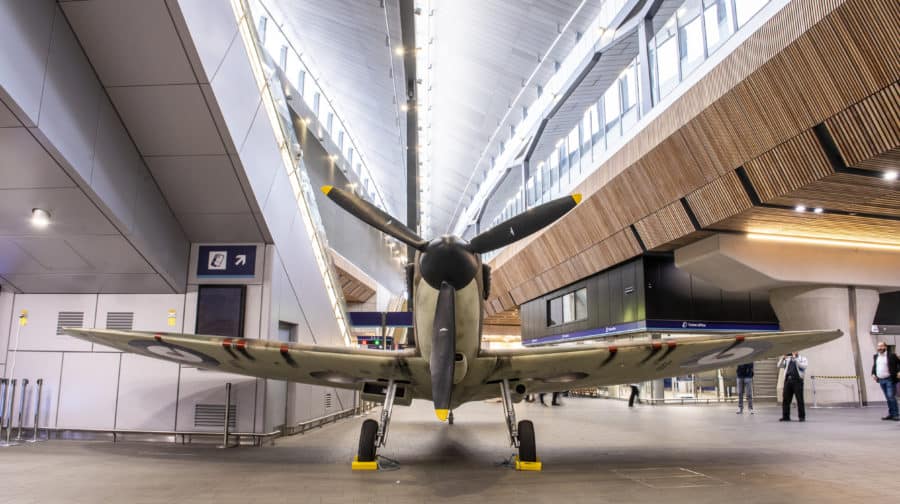 Spitfire on display on the concourse of London Bridge Station, London to commemorate the 75th anniversary of D-Day. Photographed 31st May 2019.

A full-size replica of a World War Two spitfire is on display at London Bridge train station from today until June 9, marking the 75th anniversary of the D-Day landings.

The Supermarine Spitfire is on special loan from the Imperial War Museum Duxford, Cambridgeshire.

It has been installed in the station’s new concourse, a stone’s throw from HMS Belfast which played a key role in D-Day.

The spitfire is also a reminder of The Southern Railway, as it was then known, and its own war effort back home. The railway evacuated civilians from London, brought troops back from Dunkirk, and transported military supplies.

The 75th anniversary of the landings is being marked across London with events at the Imperial War Museum in Kennington, HMS Belfast and Churchill War Rooms.

At London Bridge and Waterloo, a free newspaper about the landings will be handed out, with a digital exhibition also on show at both station.

Ian Hanson, stations director for Network Rail’s south east route, said: “We’re so excited to have a full-scale replica Spitfire on display in London Bridge’s huge concourse on the 75th anniversary of the D-Day landings.

“The Railway played a vital role during the Second World War, including transporting troops and equipment to the front lines ready for the D-Day operations.

“It’s fantastic to be able to help Imperial War Museums mark this important anniversary by hosting this Spitfire and a great surprise which we’re sure will thrill our passengers too.”

John Delaney, the head of Second World War from Imperial War Museums, said: “It is such a thrill to display our replica Spitfire in the public space of London Bridge.

“This is an unprecedented and unique way to mark 75 years since D-Day and share our historic collection from IWM Duxford with a new audience.

“It is particularly fitting that the aircraft is so near to HMS Belfast, which played a significant role on D-Day, highlighting the air and sea-borne elements of the invasion to liberate Europe.”